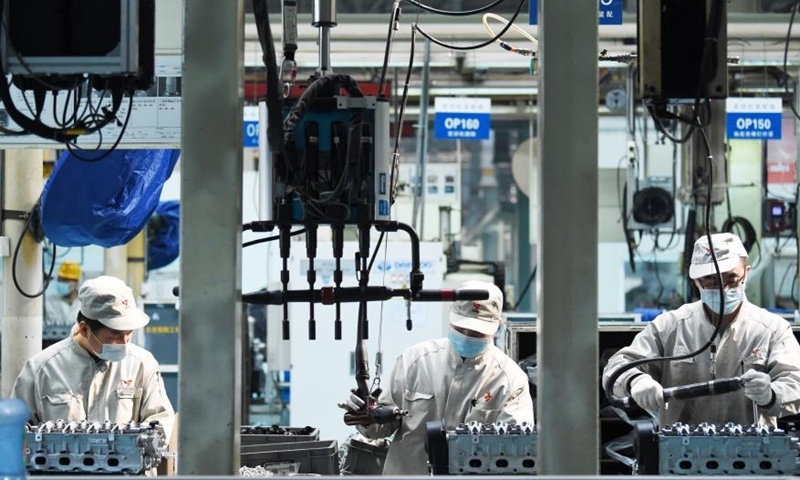 China's manufacturing activity remained in expansion territory in February, but at a slower pace compared with January, due to the impact of the Spring Festival holidays and COVID-19 flare-ups earlier this year, said analysts.

The official manufacturing Purchasing Managers' Index (PMI) fell from 51.3 in January to 50.6, data from the National Bureau of Statistics (NBS) released on Sunday showed, with supply and demand continuing to expand, but at the slowest level since May 2020.

"The Spring Festival holidays, which fell in the middle of February, had a great impact on the production and business of enterprises, reducing the vitality of the manufacturing sector," said Zhao Qinghe, NBS senior statistician.

The festival factor, however, slowed manufacturing work for foreign trade in February, as the indices of new orders for exports and imports both declined.

Liu Xuezhi, a senior macroeconomics expert at the Bank of Communications, noted that the strict virus containment measures to reduce massive population movements over the holidays and combat COVID-19 flare-ups earlier this year also had an economic impact.

Although China encouraged migrant workers to stay in their cities of work put during the holiday and factories offered bonus payments for those who did, Liu said it was hard to make up for the seasonal loss.

"But this will not change China's economic rebound trend, as the country has basically emerged from the gloom of the COVID-19 outbreaks. With a clear global economic recovery this year, there is sure to be a rising need for Chinese goods," Liu told the Global Times, adding that domestic demand will continue to recover in March.

As of Sunday, the Chinese mainland had reported zero new local COVID-19 cases for 22 consecutive days.

The NBS survey of the services sector reported a one-point decline to 51.4, but sectors related to consumption, such as retail, catering and entertainment, saw better performances than January as Chinese spend a lot during the holidays.