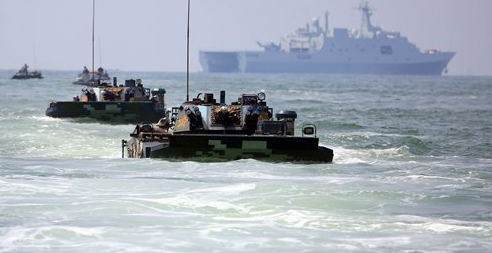 Amphibious armored vehicles attached to a brigade of the PLA Navy Marine Corps make their way to the beach-head during a maritime amphibious assault training in the west of south China's Guangdong Province on August 17, 2019. (Photo: eng.chinamil.com.cn)

The Chinese People's Liberation Army (PLA) Navy Marine Corps is striving to become a multidimensional force that operates beyond oceans and fights in all terrains around the world to serve as a fast-reacting force to protect China's growing overseas interests, in addition to the conventional task of conducting amphibious landing missions, like securing islands and reefs close to the mainland, potentially including those in the South China Sea and the island of Taiwan, experts said on Wednesday.

Since an organizational adjustment three years ago, Marine Corps troops have undergone unprecedented tests in all types of terrain in fast-paced, highly intensive combat exercises, and these operations show the Marines have turned from an amphibious to a multidimensional force, the PLA Daily reported on Tuesday.

The exercises simulated helicopter landings on a pirate ship in the South China Sea, fast boat landings on a hijacked ship in the Gulf of Aden, tropical island seizing missions with amphibious assault vehicles, infiltration missions in extremely cold grasslands, shooting training in Djibouti and competing in the International Army Games 2019 in Russia.

The drills featured sea, land and air operations with a variety of weapons and equipment as well as tactics and techniques, the report said.

As the PLA Navy moves toward the deep blue, the Marine Corps is also breaking its conventional field of amphibious and land combat, and is enhancing its capabilities in conducting a variety of missions in different strategic directions, battlefield environments, and mission regions, the PLA Daily said.

The Corps is a force to protect China's overseas interests, the PLA Navy said in a video released on its Sina Weibo account on Tuesday.

Beijing-based naval expert Li Jie told the Global Times on Wednesday that the Marine Corps used to focus on coastal defense, including potential landing missions on islands and reefs in the South China Sea and Taiwan island. But as China's strategic and economic interests expand, the Marine Corps will need to follow and protect them as well.

With China's development and China-proposed Belt and Road Initiative, the country now has many companies, projects and people overseas, and securing their safety wherever they go, especially when emergency crisis occurs, will be the mission of the Marine Corps, Li said.

China has been regularly sending naval escort task groups to the Gulf of Aden and waters off Somalia and operates a support base in Djibouti, and chances for Marine Corps activities overseas will continue to increase, Li predicted.

Previous reports said the Chinese Marine Corps has been expanding its aerial assault capabilities, and the two Type 075 amphibious assault ships, also known as landing helicopter docks, which were recently launched, will be great platforms for them to practice these capabilities.