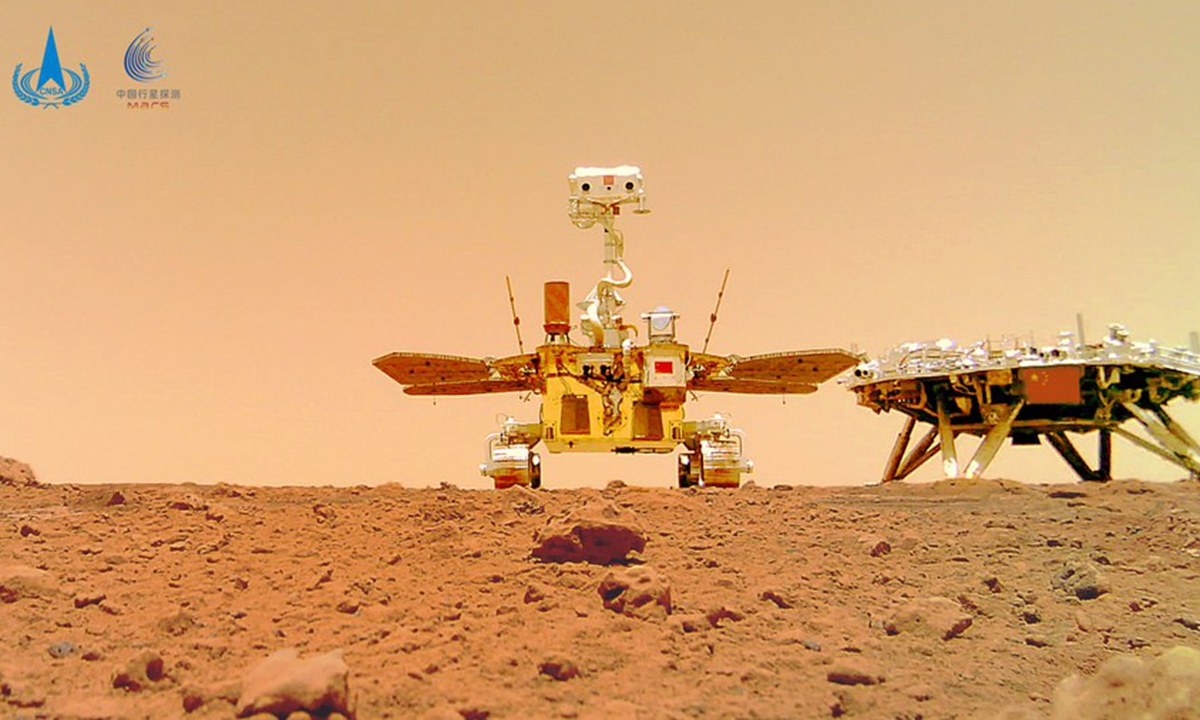 Chinese scientists have further revealed the subsurface structure and stratification of Mars in the Utopia Planitia region where Zhurong - the rover of the country's Tianwen-1 Mars mission - landed, suggesting there was no evidence of the existence of liquid water down to 80 meters in the area but there could have been two major floods that probably shaped the region.

The in-situ ground-penetrating radar survey of the Martian subsurface structure in a southern marginal area of Utopia Planitia conducted by the Zhurong rover of the Tianwen-1 mission showed that there was no direct evidence for the existence of liquid water within the radar detection depth range. However, the Chinese scientists said that they cannot rule out the presence of saline ice in the subsurface of the landing area, according to their latest journal on the findings published Monday by Nature.

On May 15, 2021, China's first Mars mission, Tianwen-1, deployed the Zhurong rover in southern Utopia Planitia, the smooth plains of volcanic and sedimentary strata that have been a prime target for exploration. This area is inferred to have hosted an ancient ocean on Mars, and scientists believe it used to be habitable.

The data from the Rover Penetrating Radar low-frequency channel show a multi-layered subsurface structure beneath the Zhurong landing area in southern Utopia Planitia, the first of its kind identified on Mars, according to the Nature journal.

According to the Xinhua News Agency, scientists with the Institute of Geology and Geophysics under the Chinese Academy of Sciences (CAS) constructed a detailed, high-precision subsurface structure image profile based on radar data collected by the Zhurong rover in its first 113 Martian days along the roughly 1,171-meter traverse of the rover.

Although it found no direct evidence of liquid water down to 80 meters, Zhurong detected two horizontal layers with interesting patterns. In a layer between 10 and 30 meters deep, scientists said the reflection signals strengthened with increasing depth.

They said that this is probably due to larger boulders resting at the base of the layer, and smaller rocks settling on top. An older, thicker layer between 30 and 80 meters down showed a similar pattern.

According to Chen Ling, co-author of the journal and a seismologist at the CAS Institute of Geology and Geophysics, the different layers might have been shaped by two major floods.

At the International Astronautical Congress 2022 in Paris, Wang Qiong of the Lunar Exploration and Space Engineering Center under the China National Space Administration (CNSA) disclosed further details of China's Tianwen-4, which could be a two-for-one shot to probe Jupiter's system and Uranus in one go around 2030.

The mission will see a larger probe destined for Jupiter and smaller spacecraft to be sent to make a flyby of distant Uranus. The pair will launch on a Long March 5 rocket and use a Venus flyby and two Earth flybys to fling the spacecraft on a trajectory for the outer solar system before separating and setting course for their respective targets, according to the Space.com website.

"The scientific goals are still under consideration," Wang told Space.com after the presentation.

According to a page slide circulated online during Wang's presentation at the event, the mission will also include an asteroid exploration stage before the two probes part ways, and one of the probes will visit the Jovian moon Callisto and the other will attempt to probe Uranus.

Nine US NASA spacecraft have either flown by or orbited Jupiter, though none has ever orbited any of its moons. Only one spacecraft, NASA's Voyager 2, has ever reconnoitered Uranus, flying by the planet in 1986. Both Chinese spacecraft could also make an asteroid flyby on their way to the outer solar system, though that possibility has yet to be decided upon, Time magazine said on Friday, making comparisons between the Tianwen-4 and previous US missions.

The CNSA confirmed the prospects of the Tianwen-4 mission, while saying there was no further information available as of press time.

Song Zhongping, a space watcher and TV commentator, told the Global Times that such an ambitious plan must have been fully examined by Chinese space authorities and it's therefore a realistic and feasible one. It could best show that China always pursues the maximum use of every single spacecraft.

Zhang Rongqiao, the chief designer of the Tianwen-1 Mars probe mission, revealed to the media in May that Tianwen-2 has entered its prototype research and development stage, and it is expected to be launched by 2025. Tianwen-2 will be a decade-long mission, during which the probe will carry out observations as well as returning samples from near-Earth asteroid 2016HO3.

According to Space.com, the target asteroid is also named Kamo'oalewa, which may actually be a blasted-off piece of Earth's moon.

The Tianwen-3 mission aims to collect samples from the Red Planet and deliver them to Earth.