CHINA China's mask exports not as promising as expected

China's mask exports not as promising as expected

Despite the spread of the coronavirus, which has killed more than 30,000 people globally, Chinese face mask makers are faced with a bumpy road in exporting medical equipment. 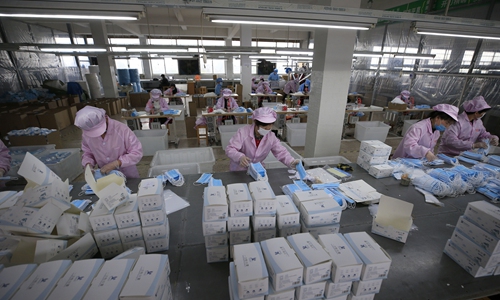 The Global Times learned that issues including difficulty in obtaining qualification papers for exports, concerns that Chinese-made masks might be intercepted or detained by foreign customs authorities, soaring costs of shipment and logistics, and declining profits are weighing on Chinese mask makers who had thought the exports would be promising.

Zhejiang Kaierhai Textile Garments Co, based in Shaoxing, East China's Zhejiang Province, now mainly exports to clients in Australia and Europe. The company's production line can make about 400,000 disposable surgical masks a day, of which 90 percent is exported.

Jin Xiaobo, CEO of Kaierhai, told the Global Times that the masks are sold at 1.3 yuan ($0.18) each to foreign clients, which is cheaper than the original price of 1.5-1.6 yuan for domestic consumers, as prices of raw materials have dropped and capacity has picked up now.

Costs of logistics are rising amid massive cancellations of international flights and explosive demand for medical supplies from China, according to Jin.

"The number of available cargo ships is also dwindling. It's so hard to book a slot in a container ship."

To bring down all the risks, some Chinese mask suppliers adopt a distinctive export model, in which they are only responsible for relevant procedures in China and foreign clients take charge of the rest, including finding flights to carry the goods to their destinations and go through local customs clearance.

The current mask export market has been disrupted by mushrooming companies that are rushing to shift to mask production in a bid to make profits on booming overseas demand. Accordingly, third-party agents providing export qualification services are also eyeing the lucrative market, industry insiders said.

Zhang Youxuan, program director at Shanghai Shiyou Supply Chain Management Co, told the Global Times that some unlicensed third-party agencies without the required qualifications are making profits from the epidemic and have issued many invalid licenses.

To enter the European and US markets, they must have the Conformite Europeenne (CE) license or the US Food and Drug Administration (FDA) permit.

The number of such agents has surged to thousands, who claim that they can help mask makers obtain export licenses within two or three weeks, while raking in 20,000 to 30,000 yuan, said Zhang.

Jin of Kaierhai said it took about one month and more than 70,000 yuan for him to apply for the FDA certificate.  "Our certificate is on record, but we need to wait about six to nine months for the result to be publicized. We cannot say we have obtained a formal certificate until that time," Jin said.

Given that situation, Jin does not plan to export to the US over concerns that the local customs authorities may "settle accounts with them afterward" and fine them for not gaining legitimate certificates after the pandemic is controlled worldwide.

Cao Jun, general manager at the Zhejiang-based Lanhine Corp, which is mainly engaged in making face masks and protective face shields, told the Global Times that according to his knowledge, there are at most 10 Chinese mask producers who have completed FDA registration and obtained FDA 510K - a premarket submission made to the FDA to demonstrate that the device to be marketed is safe and effective.

"I have a friend who spent 20,000 yuan on a CE certificate, but he cannot export masks to France because authorities there don't recognize it," Jin noted.

According to Zhang, some CE certificates issued by third-party agents are not fake but they are indeed invalid. "There are different standard codes on the certificate showing which category the masks belong to, for instance, medical ones or non-medical ones. If the exports and the codes do not match, the products are not likely to get through customs."

There are also potential risks that some intermediary nations through which the masks pass on their way to their destinations may intercept and confiscate the masks. In that case, Chinese manufacturers face the peril of losing their products while not being paid.

But most trading companies do not have the latter one, Li said. There are only eight manufacturers in East China's Anhui Province, where Li's company is based, that have gained the mask registration certificate.

Li explained that some masks manufactured by those trading companies are classified as labor protection products, as they could only filter out hazardous substances, while medical products could filter out viruses and bacteria.

Melt-blown fabric is the core of a medical mask. A standard melt-blown fabric should be able to filter out 95 percent of the virus. But the masks made by some unqualified manufacturers are unable to achieve such a rate, and some of them even did not insert such melt-blown fabric, according to Li.

Given the problematic export market, China has responded by stepping up efforts to ensure the quality of medical supply exports, the Ministry of Commerce (MOFCOM) said on Monday.

Investigations will be carried out into any cases with potential quality issues, and China has vowed zero tolerance on such issues, the ministry said.

Together with the General Administration of Customs and the NMPA, the MOFCOM will issue an announcement requiring that exported medical supplies must obtain relevant qualifications and meet the quality standards of the importing country or region.

China has a complete supply chain for mask manufacturing, with more than 90 percent of raw materials sourced locally, according to industry insiders. US mask-makers such as 3M produce most of their masks in plants in China.

"China only sources raw materials for melt-blown fabric, which is extracted and refined from petroleum, from foreign countries such as those in the Middle East region," Li of Anhui Fumei said.

Chen Hongyan, secretary-general of the Medical Appliances Branch of the China Medical Pharmaceutical Material Association, told the Global Times that the tight supply of raw materials has greatly eased, and the supply-demand relationship is balanced.

China's daily output of masks reached 116 million as of the beginning of March, 12 times the figure in early February, official data showed.

"It would be much more difficult for foreign companies to establish a local supply chain in a short time, and they still need to rely on raw material supplies from China," said Chen.