Imagination and innovation, if explored appropriately, may steer history to a better course.

Some robots are now working in Chinese hospitals and feature similar functions to Baymax, the amicable fictional healthcare robot in "Big Hero 6." 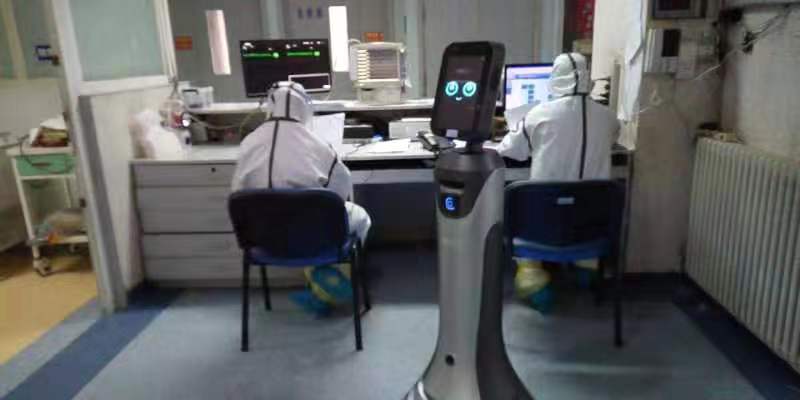 The robot, donated by Cheetah Mobile, works in the Epidemic Prevention and Control Center at the Haidian Section of Peking University Third Hospital. (Photo: Agencies)

With a touch screen head on top of a black and grey metallic body, the robot has been used in inpatient wards where medical personnel are fighting days and nights to rescue those who have succumbed to pneumonia caused by COVID-19.

"The robot working for remote diagnoses was one of the products of OrionStar Series developed for different demands against a variety of milieus. Since the outbreak of COVID-19, we have launched the anti-epidemic products in hospitals in the hope that they can alleviate the tension resulted from insufficient medical personnel as well as cross infections," said Fu Sheng, CEO and chairman of Cheetah Mobile.

According to Cheetah Mobile's engineers, while zigzagging the corridors of the hospital, the robots need to rely on their multi-modal navigation plus visual recognition system to locate the right patient in wards. The entire process requires the robots to be stable and precise, which calls for capabilities such as indoor and relative navigation, visual recognition, smart mobility, and occasional circumventions.

OrionStar's Intelligent Epidemic Prevention and Control Robot is designed around the core concept of remote diagnoses. It can help free medical staff from simple repetitive tasks.

These robots have been deployed in some Chinese hospitals, including Peking University Shougang Hospital, the Haidian Section of Peking University Third Hospital, and the temporary Huoshenshan Hospital in the epicenter of Wuhan, the capital of Hubei province.

Before rolling out their products during the pandemic, the company had a discussion with health workers to learn about the actual demands of the hospitals.

"From guidance to remote diagnoses and from ward rounds to psychological consultation, our engineers talked to medical staff during every phase and carefully considered their feedback before finalizing our designs," Fu said.

"During our talks, we were impressed by the participation and the willingness of medical staff to fight against the epidemic," the CEO added.

Xie Liang, director of the Information Office of the Haidian Section of Peking University Third Hospital, said, "With the help of robots, which can cope with the less emergent issues, such as answering patient inquiries and conducting preliminary diagnoses, we have more time to do more urgent and important tasks."

"Besides," the doctor continued, "the contactless diagnoses function - which ensures a much safer environment for doctors – there are also communication and entertainment functions, which come in handy to ease the frustration of patients."

According to Fu, the company plans to adopt more artificial intelligence, robotic technology, and big data technologies to family and public-centered services. He hopes that the company can provide an increasing number of useful and efficient solutions to address public events or crises.

"As a tech company, we can still do more in addition to our donations," he said.