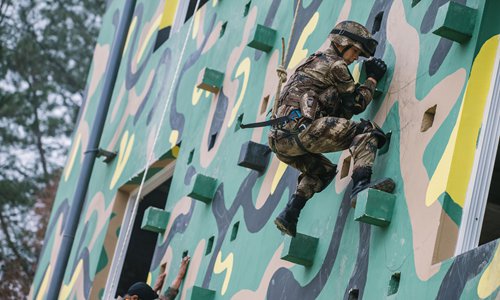 An exercise of the PLA special troops is filmed and uploaded on to the Douyin for public to view. (Photo: Global Times)

For most people, the daily fabric of the lives of uniformed military personnel is mysterious. But now the People's Liberation Army (PLA) is shining a light on this unknown area. It is using short videos to present the stories of its soldiers. This tool is truly young, modern and fresh. The popular Chinese short video-sharing app Douyin (known as Tik Tok overseas) has been recently embraced by Chinese military groups. The PLA, including its five main theater commands, has opened an official account on the platform to share snippets of soldiers' daily duties. Special forces, the navy, ground force and air force are all part of this. To keep up with online trends, the Chinese army has now integrated new media technologies to attract young fans. Themes are very diverse in the videos, presenting a wide range of facets a service member may experience. This ranges from training and deployment, wounds and dangers, to soldiers making emotional returns home to surprise families, and sentimental moments after leaving the forces. Utilizing this new form of media, traditionally mysterious army anecdotes are presented in a more humorous and down-to-earth manner. The image of soldiers is changing from a serious and cold symbol to a vivid and charming one.