The Chinese People's Liberation Army (PLA) 75th Group Army recently received delivery of a batch of new weapons including China's most advanced vehicle-mounted howitzer, the PCL-181, as identified by Chinese military enthusiasts in photos showing the commissioning ceremony when its troops were conducting exercises in northwestern China amid border tensions with India. 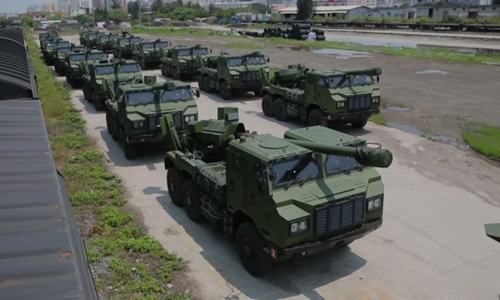 A brigade under the PLA 75th Group Army recently held a commissioning ceremony for a series of new weapons and equipment during field exercises in northwestern China's desert areas, Nanjiang Haojiao, or Horn of the Southern Border, the official WeChat public account of the 75th Group Army, revealed in a statement released on Tuesday.

Several PCL-181 vehicle-mounted howitzers can be clearly identified in a number of photos attached in the statement.

This type of 155 millimeter caliber wheeled howitzer made its public debut as a newly developed weapon at the National Day military parade in Beijing on October 1, 2019.

It weighs only 25 tons, making it much lighter and faster and with longer endurance than the previous self-propelled howitzer, which uses crawler tracks and weighs more than 40 tons, according to China Central Television (CCTV).

Its light weight also gives the weapon an edge in high altitude areas when the lack of oxygen could impact the power of the engine, and it is also very agile and fast in quick-reaction deployments, a military expert who asked not to be named told the Global Times on Thursday.

Digitalized control panels can be found in the howitzer's cab, and this highly digitalized system allows artillery gun deployment with the press of a button, automatic gun calibration and semi-automatic ammo reload. This can shorten the preparation time needed to shoot the weapon, giving the artillery stronger combat capabilities, CCTV reported previously.

Artillery weapons like howitzers are useful in mountainous areas because projectiles fired from them follow a parabolic path, which can bypass mountains on terrains which would block linear shots from, for instance, traditional tanks, the expert said, noting that China has a lot of this kind of terrain along its western borders.

During the Doklam standoff with India in 2017, PCL-181s were dispatched to the PLA Western Theater Command and contributed to the safeguarding of peace at the border, Shanghai-based news website eastday.com reported on Wednesday.

China and India are currently in a new round of border tensions. Chinese Foreign Ministry Spokesperson Hua Chunying said at a press conference on Wednesday that both sides have taken steps to reduce tensions along the border in accordance with the consensus they reached, in response to questions on the withdrawal of troops along the border, where a standoff had reportedly taken place in recent days.

The latest commissioning of the PCL-181s likely took place before the positive border talks between China and India on Saturday, observers believed.