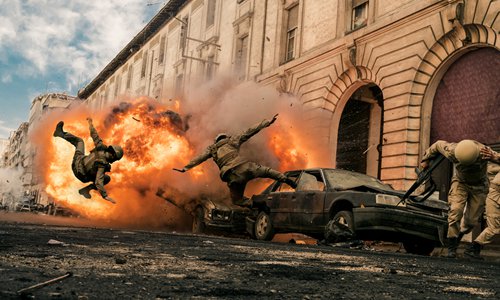 On Wednesday, the two highest grossing blockbusters in Chinese cinemas were Amazing China, a documentary depicting China's achievements, and Operation Red Sea, a film about the Chinese Navy's elite Special Forces, according to Maoyan, a popular film database in China.

"Film is an art form that attracts both the elderly and youth. It's much better than dull preaching in promoting important values," Su Wei, a professor at the Party School of the Chongqing Committee, told the Global Times.

"As China has been experiencing rapid urbanization, many young people hailing from small villages have settled down in cities where cinema halls aren't uncommon. For them, watching films has become an important recreational activity," Su added, hinting that it is about time that China starts spreading important values through its movies.

In 2016, Chinese President Xi Jinping urged Chinese artists and writers to strengthen their confidence in Chinese culture and create excellent works which can inspire the nation and encourage every Chinese person's "sense of national pride and honor," Xinhua reported.

To ensure screening for patriotic films, the State Administration of Press, Publication, Radio, Film and Television (SARFT), issued a document last month stating that 5,000 out of a total of 50,000 cinema halls nationwide will be selected as "people's cinemas" to screen designated mainstream films at normal times as well as some important films during special events.

Organized group viewing activities, discounted prices and preferable policies - as well as financial support and bonuses - will be given to these cinemas, read the document. A chosen cinema hall's seating capacity should be no less than 100. In every county with a cinema, there must be one designated as people's cinema; at the city-level, there must be at least one per district.

Shi Wenxue, a Beijing-based film critic, told the Global Times that building people's cinemas is an important move by SARFT to consolidate cultural confidence and push forward the prosperity and development of socialist culture.

"Cinema halls selected to screen designated films guarantee the screening rates of lower-budget mainstream films. These films often can't compete in the market, but they have an important educational purpose," he said, adding that movies should not just be about recreation.

"There is a new trend that more investment goes to patriotic films. This on the one hand is because of the government's support, and on the other hand is due to the strong box office these films have generated," said Shi.

"Compared with past mainstream films, new mainstream films echo modern times, carry deeper meanings and cover broader areas," he added, noting that in recent years many films have begun to show how China actively participates in the world peace mission.

Reality-based films now have a stronger Chinese audience base, he added. Amazing China, co-produced by China Central Television and the China Film Company, as an example, not only has harvested huge box office, but also has won praise and positive comments on Chinese social media and film-rating websites.

On Sina Weibo, the official account of the China Communist Youth League gave positive feedback about the film. Media and moviegoers, including local government organs, also revealed that they have organized viewing parties for Amazing China.

On popular Chinese entertainment review platform Douban, the rating option for ordinary audiences to rate Amazing China is currently closed, but for media reviewers the film rates an 8.5 point out of 10.

A CPC member surnamed Ye, who works as an engineer at a State-owned construction company, told the Global Times that his team will watch the film later as a group, but some colleagues have already been organized to see it.

"My colleague said that he was moved by the movie, which closely linked the small family with the country, our big family," he said.

Ye previously watched two patriotic Chinese films, Wolf Warrior 2 and Beginning of the Great Revival, at viewing parties organized by his company. "I wouldn't have seen these films if I needed to pay myself," he admitted.

Su said that an organized film viewing party is important to educate young people, but he warned this shouldn't occupy too much personal time.

Linda (pseudonym), an employee at a major cinema line, told the Global Times that commercial cinemas are holding intensive screenings of Amazing China in order to show their "positive attitude" toward the country.

On Wanda Film's official WeChat account, an article shared last Wednesday announced that over 400 Wanda cinemas across the country have actively scheduled screenings of Amazing China. It promised to offer people that book an entire hall a discounted price of just 30 yuan ($4.74) per ticket, half the regular retail price. Over the past weekend, another popular cinema line, UME in Beijing, screened Amazing China at 10-minute interval in some of its theaters.

According to Linda, the most important criterion for a Chinese film in terms of screen share is its production value and the box office appeal of its director and actors. But for some mainstream films, extra sales efforts are sometimes required.

"For sales of mainstream films, it depends on the cinema's own sales staff to find potential moviegoers who have the ability to book a whole hall," she said, adding that for Amazing China, a cinema's sales staff must seek out cooperative companies to book their theater. "But it's still the quality of the film that decides whether or not it will be a hit," Linda said.

In recent years, mainstream Chinese films have undergone a transformation by instilling a more humanistic spirit in their stories and using fresher faces to attract younger audiences, according to Shi.

One popular method is to use "fresh meat," a term referring to young handsome male actors, to attract millennials with disposable incomes.

In Operation Red Sea, Dante Lam used Huang Jingyu, a post-1990s actor, as its lead. Huang was once banned from the popular entertainment show Happy Camp reportedly for performing in the hit gay-themed web series Addicted (2016).

Addicted was also removed from Chinese streaming websites after a new television rule stipulated that the depiction of abnormal sexual relations, including homosexuality, is forbidden in China.

Huang's largely female fan base, which numbers in the millions, welcomed his triumphant comeback, and contributed to Operation Red Sea's box office success.

While using young actors with unproven talent just to attract an audience has been criticized by some elders in China's motion picture industry, Shi said previously that "it's now important to attract young people to the cinema first using an array of popular idols. Then the film can have a better patriotic educational effect."

Su said that, given the influence of young idols on China's millennial generation, "fresh meat" is an effective tool to promote core socialist values among young Chinese.

Last year, over 100 top filmmakers and popular stars, including "fresh meat," were invited for a day to Hangzhou, Zhejiang Province, where they assembled to study the spirit of the 19th National Congress of the CPC and promote a socialist culture with Chinese characteristics.

"To unite, cultivate and lead talents in every field has always been a tradition of the Party. Entertainment talents are no exception," said Su.

Hu Cheng, vice director of China Red Culture Research Association, wrote on kunlunce.cn that the Party should "take back the lost art land."

According to Hu, films directed by Hong Kong directors are purely commercial and neglect Chinese people's deep moral experiences while failing to uncover the true, the good and the beautiful.

"Chinese films at the current stage have lost cultural confidence. They're only Hollywood- and market-oriented and have totally lost the principle of the Party," Hu wrote.

He further criticized that Hong Kong directors have turned the Chinese PLA (army) into China's version of the American Marine Corps, which promotes individualism (soldiers going rogue) rather than collectivism.

Su said he partly agrees with Hu's opinion. He noted that, so far, these popular patriotic Chinese films are still at the stage of taking references from Western experiences and require further improvement.

Su took Operation Red Sea as an example, which stresses a core slogan "the strong are invincible," saying "this is a wrong value."

"The successes of the Party, Chinese people and the revolution all represent the weak overcoming the strong. If the strong were invincible, there never would have been a New China," said Su, adding that it should be "the benevolent are invincible."

Su is optimistic that such shortcomings will be fixed in the future as China finds its own film narrative. While popular patriotic films including the box office record-breaking Wolf Warrior 2 use a Hollywood-like narration, it still failed to receive international recognition.

Shi said that this is because "art has no boundary, but ideology has boundaries. An important characteristic of mainstream films is their strongly attached ideology. So exporting to foreign lands should not be the pursuit of mainstream Chinese films."

"Even if Chinese mainstream films won't win an Oscar, we have our own domestic awards to reward them," he said.