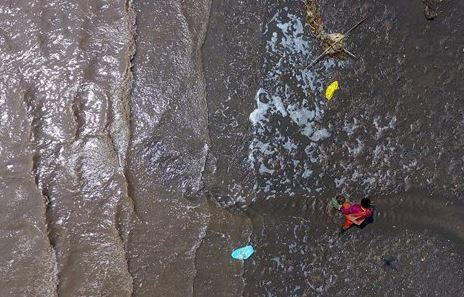 A local fisherman picks up trash at a beach in North China's Tianjin Municipality on March 24. (Photo: IC)

China on Monday stepped up its efforts to crack down on activities that pollute the seas by dispatching on-site inspectors to four coastal cities, part of the country's broad effort to better protect the environment.

Though these tougher actions from regulators prompted some worries about the economic impact, particularly as China is fighting a trade war with the US, experts said that environmental protection will not restrain economic development in the Bohai Sea region.

The ministry plans to finish on-site checks in the Bohai Sea region by the end of 2019. The Bohai Sea is China's only semi-closed inland sea,  which faces grim ecological conditions despite recent efforts involving environmental protection.

China will go for a green and higher quality of development despite economic downward pressure, Li Xinchuang, director of the China Metallurgical Industry Planning and Research Institute, told the Global Times on Tuesday. "Environmental protection will not restrain economic development. Green development will increase efficiency.

"The production limit will affect enterprises, but it will do good to the industry and environment. The limit targets enterprises that cause pollution, which forces steel producers to shift to a low-emission and high-efficiency model," Li said. "This is one example that underscores China's vow to develop in a green way."

China was the biggest steel producer in 2018 with the output of 928.3 million tons, according to the World Steel Association.

The output of crude steel in Tangshan reached 88.31 million tons in 2016 whereas that of India, the second-largest steel producer in the world, was 95.4 million tons.

"Steel output in China has surpassed demand. This abundant production allows China not to rely on imports, which means China gains the initiative in the trade tensions," Li added.