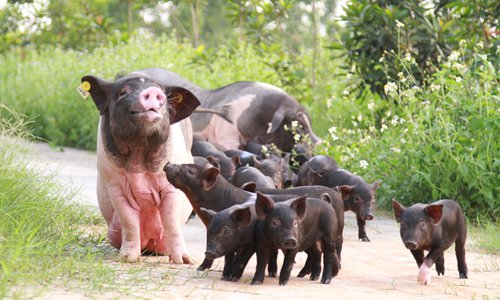 Wu Tianhong, a farmer in Chun'an county, Zhejiang Province, is proud of the 30 Chun'an pigs in his farm.With their distinctive wrinkled face, spotted skin and four short legs, Chun'an spotted pigs are one of 16 native pigs in Zhejiang Province. Before the 1980s, almost every farmer reared the native species. But in recent years, this became rare as imported breeds of pigs began to dominate China's swine industry. Wu is among a growing number of farmers who are shifting to native species."Although my pigs grow slower than foreign breeds, they taste better and can sell for a better price," he told the Global Times.China produces nearly half of the world's pork, according to a report by the US Department of Agriculture. In 2017, 688.61 million pigs were slaughtered in China, producing 53.4 million tons of pork, according to the National Bureau of Statistics.However, experts say only a tiny percent of these pigs are native Chinese pigs, which are on the verge of dying out. Jiang Yanzhi, professor in animal breeding at Sichuan Agricultural University, said only 2 percent of sows in China are native species. According to a report by China Youth Daily, from 1980 to 2000, the number of Cantonese pig sows, native to South China's Guangdong Province, dropped from 13,000 to only several hundred. The number of sows of the Jinhua pig, from East China's Zhejiang Province, dropped from 250,000 to around 10,000 in 2007. Many pigs are now endangered, and some have even gone extinct.

China started to import foreign pig breeds as part of its efforts to modernize its agriculture and husbandry industry in the 1980s. Since then, Yorkshire which originated from Britain, Landrace from Denmark and Duroc from the US became the most common foreign pigs imported to China, dominating the Chinese pork market. At the same time, the number of native Chinese sows plummeted.Foreign pigs grow faster and have a higher proportion of lean meat, promising better returns than native pigs for farmers. For example, a Chinese pig may take one year to grow to the same weight that foreign pigs weigh in six months.But the drop in number of native pigs has resulted in unwanted consequences. One is that many Chinese cuisines lost their best ingredients.Jinhua pigs, for example, are great for making Jinhua ham, and pork from Chenghua pigs, with thick skins, is best for making twice-cooked pork, the famous Sichuan-style dish featuring simmered, sliced pork stir-fried with cabbage.What is more important is that the decrease of native species will result in a loss of biodiversity, which Jiang said means pigs will be more vulnerable if an epidemic hits.New hopesIn order to boost the number of China's native pigs, Chinese authorities have rolled out a series of measures to protect these breeds. According to statistics from a 2016 document by the Ministry of Agriculture, there are 90 species of native pigs. Among them, 42 are under State-level protection and 32 under provincial-level protection, meaning that they cannot be slaughtered. Many breeding farms have been built across China to boost China's native pig species.In the meantime, for the species that are not protected, more and more farmers are voluntarily raising them, as they see promising market opportunities.The golden days for native pigs may not be far away. Experts think with their distinct meat texture and better resistance to diseases and viruses, native pigs may help raise the standard and the international competitiveness of Chinese pork.They may be especially welcome in the high-end market, as Chinese families pay more attention to food quality. "If their cost is kept at 1.2 to 1.5 times the cost for raising common pigs, and their market price rises to twice the average cost of common pork, it will be profitable," Jiang said.Wu, the farmer, is confident that his pigs will bring him good profits. Due to their high quality, he plans to sell them at twice the price of the common pork sold in the market, and believes consumers will be willing to pay higher prices for better quality meat.