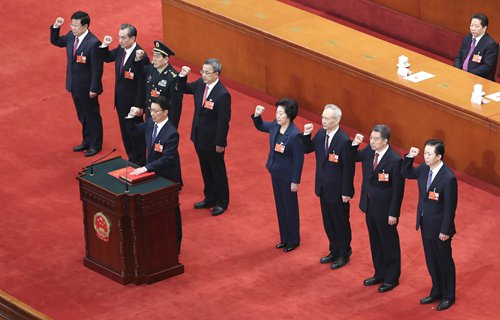 Vice Premier Han Zheng (front) leads other vice premiers, state councilors and secretary general of the State Council during their oath-taking ceremony as they swear allegiance to the Constitution on Monday (Photo: Global Times)

A new lineup of China's State Council, nominated by Premier Li Keqiang, was endorsed Monday at a plenary meeting of the First Session of the 13th National People's Congress (NPC), marking the culmination of China's leadership reshuffle.

Wang Yi on Monday was reappointed China's foreign minister. He was also endorsed for a new post as a state councilor.

Analysts said Wang's reappointment represents continuity in China's foreign policy whereas his concurrent post as state councilor is a signal of rising status of the foreign ministry in China's political hierarchy. "The reappointment is an affirmation of his work over the past five years. It shows China's major-country diplomacy, carried out by the foreign ministry under Wang's lead, is deemed successful," Wu Xinbo, director of Fudan University's Center for American Studies, told the Global Times. "Wang Yi's concurrent post as state councilor is a sign of the foreign ministry's changing status in China's political hierarchy as foreign affairs have become increasingly important for the country," Wu said. Wang Yiwei, director of the Institute of International Affairs at the Renmin University of China, said China's continuity in foreign policy is a good signal for the rest of the world. "It projects China as a stabilizing force in an ever more unstable world," he told the Global Times. Wang Yi became China's foreign minister in 2013. He had previously worked as director of the State Council's Taiwan Affairs Office and as Chinese ambassador to Japan.Also on Monday, Wei Fenghe was endorsed as China's defense minister. He will also serve as a state councilor. Wei, born in 1954, served as the commander of the Second Artillery Corps of the People's Liberation Army (PLA) and later as commander of the PLA Rocket Force. Song Zhongping, a military expert and TV commentator, told the Global Times that Wei's background indicates an emphasis on developing military technology. "If we take a look at Xu Qiliang and Zhang Youxia, the two newly endorsed vice chairpersons of the Central Military Commission, we will find that they too have a strong technological background, with Xu being a pilot and Zhang serving in the PLA General Armament Department. In the future, the PLA will attach great importance to technology and training. And by doing so, the military is seeking to enhance its combat capability," Song said. New governor for PBCOn Monday, Han Zheng, Sun Chunlan, Hu Chunhua and Liu He were endorsed as vice premiers. Han Zheng is a member of the Standing Committee of the Political Bureau of the Communist Party of China (CPC) Central Committee. He previously served as Shanghai mayor for more than a decade. Sun Chunlan previously served as Party chief of Tianjin and head of the United Front Work Department of the CPC Central Committee. Hu Chunhua had worked many years in Southwest China's Tibet Autonomous Region and recently as Party chief of South China's Guangdong Province.Liu He, 66, has been the head of the General Office of the Central Leading Group for Financial and Economic Affairs and a vice minister of the National Development and Reform Commission (NDRC).The former vice governor of the central bank was elevated to governor. US-educated Yi Gang, 60, has been promoted from vice governor of the People's Bank of China to governor. He had served in his previous post since 2008 and was instrumental in steering monetary and currency policy, including the landmark yuan devaluation in 2015.Along with Wang Yi and Wei Fenghe, three other new state councilors were endorsed at the NPC meeting on Monday. They are Wang Yong, Xiao Jie and Zhao Kezhi.