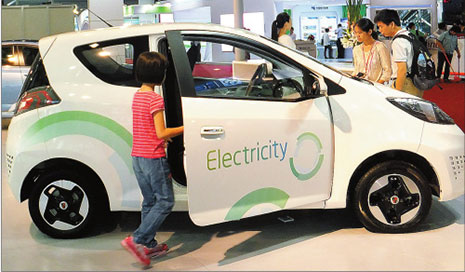 China's new energy vehicle market recorded another year of rapid growth in 2017 with both sales and production surging more than 50 percent annually, data from the country's auto industry association showed. A total of 777,000 new energy vehicles were sold in the Chinese market last year, up 53.3 percent year on year, the China Association of Automobile Manufacturers (CAAM) announced Thursday. The growth was 0.3 percentage points faster than the level in 2016, when China sold more new energy vehicles than anywhere else for a second year. New energy vehicle production jumped 53.8 percent to 794,000 units last year, up 53.8 percent from the previous year, according to CAAM. The robust growth came on back of China's intensifying efforts to encourage the use of new energy vehicles to ease pressure on the environment by offering tax exemptions and discounts for car purchases, and ordering government organizations to buy more new energy cars. China remained the world's largest auto market in 2017, with auto sales steadily climbing 3 percent year on year to 28.88 million units, according to CAAM data.