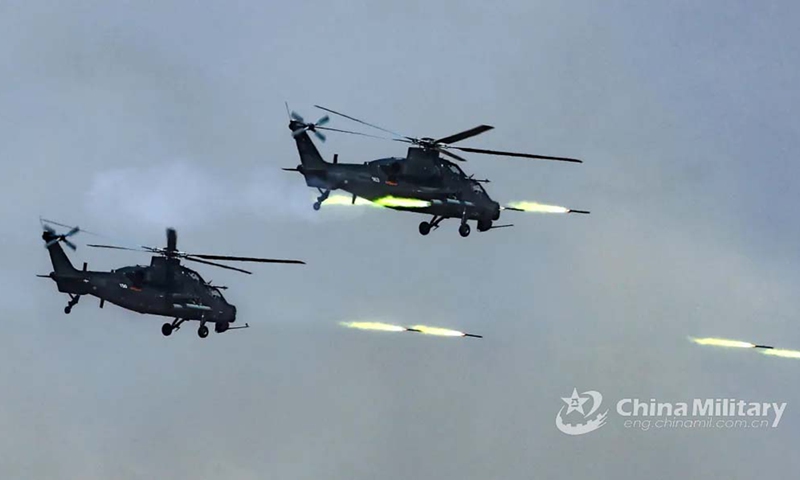 An armed helicopter fleet launches an assault on the defense works and firing points of the mock terrorists during the low-altitude defense penetration operations in the China-Russia joint military exercise ZAPAD/INTERACTION-2021 at a training base of the PLA Army in Qingtongxia City of West China's Ningxia Hui Autonomous Region from August 9 to 13, 2021. (Photo: GT)

China's top helicopter makers recently announced that a new type of helicopter with an innovative design has successfully completed its maiden flight, and this prototype chopper will lead to the development of the next-generation, high-performance helicopter for the Chinese People's Liberation Army (PLA).

The new helicopter, which might have a completely different aerodynamic design compared with most current ones, could feature a higher speed, better stealth capabilities or a larger takeoff weight, analysts said on Tuesday.

In order to break the limits of the conventional aerodynamic design, enhance performance and combat capabilities, push forward technological innovations and optimize the industrial development modes, the Changhe Aircraft Industry (Group) Corporation Ltd and the China Helicopter Research and Development Institute, both based in Jingdezhen, East China's Jiangxi Province as subsidiaries of the state-owned Aviation Industry Corporation of China (AVIC), launched a self-funded project to develop a new helicopter platform in March 2019. The project was reviewed in March 2022 in a routine joint work conference conducted by the two subsidiaries, the institute said in a press release on its WeChat account on Sunday.

The new helicopter has successfully completed its first flight and is conducting more test flights to verify its performance, according to the press release.

It will lay down a solid foundation for the upcoming development of the next-generation, high-performance helicopter for the PLA, the press release said. It noted that through the project, the two AVIC subsidiaries have resolved many technical problems in advance, and is promoting the approval of a national project for the continued development of the new helicopter.

In line with the trend of technology development in the world, a new helicopter in demand could feature characteristics like a higher speed, better stealth capabilities or a larger takeoff weight, a Chinese military expert told the Global Times on Tuesday, requesting anonymity.

The US reportedly deployed a stealth-capable variant of the Black Hawk helicopter during the raid in Pakistan on Osama Bin Laden in 2011.

As the new helicopter will have a completely new aerodynamic design, it is difficult to predict its capabilities now, the expert said, noting that since the project is a self-funded one and the helicopter is still a prototype, it will likely still take some time for it to become mature.