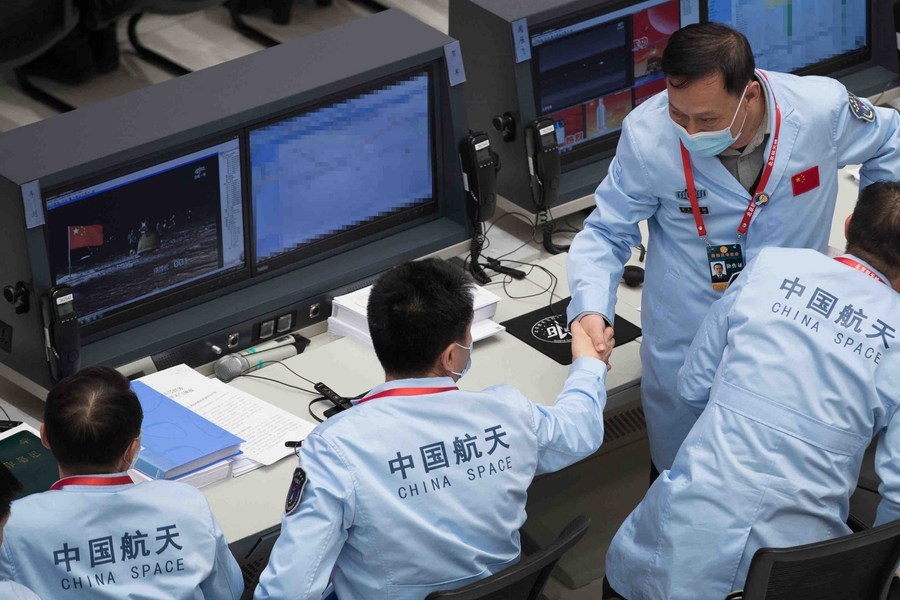 BEIJING, Dec. 17 (Xinhua) -- The successful re-entry and landing of the Chang'e-5 capsule on Thursday has enabled China to obtain its first lunar samples, marking a new start for the moon and planetary research.

The major goal of Chang'e-5 was to get things back. This will improve understanding of the state, temperature, material content and other important information of the moon.

No matter how far China goes into the space, it always stays true to its original target -- unveiling the secrets of the universe and contributing to humanity's peaceful use of space.

The Chang'e-5 probe, comprising an orbiter, a lander, an ascender and a returner, was launched on Nov. 24. Its lander-ascender combination touched down on the north of the Mons Rumker in Oceanus Procellarum, also known as the Ocean of Storms, on Dec. 1, where it used drills to collect subsurface samples and a robotic arm to grab samples directly from the surface.

The landing site was wisely picked. Mons Rumker, never sampled before, is geologically younger than the sampling areas of the U.S. and the Soviet missions. Scientists believe the new samples could help fill an important gap in their understanding of the moon's volcanic activity and evolution.

Adopting a complicated technological approach, the Chang'e-5 mission overcame many technological challenges, including China's first spacecraft liftoff from an extraterrestrial body and first unmanned rendezvous and docking in lunar orbit.

China views these efforts as part of the world's lunar exploration. It chose a different landing site and is promising to share its samples to enrich knowledge about the moon. Some foreign scientists have shown special interest.

The exploration is not for commercial purposes, but for international scientific research. Humanity shall explore the moon together, as it will eventually involve large projects requiring international cooperation.

The mission will lay an important foundation for China's future manned lunar landing and deep space exploration. Next, China plans to explore the South Pole of the moon for water-ice resources and is considering an initiative for joint efforts to build an international lunar research station.

Rocket pioneer Konstantin E. Tsiolkovsky once said Earth is the cradle of humanity, but one cannot remain in the cradle forever. Almost a century later, humans have taken only a few steps forward into the space, let alone the vast universe.

No one knows what risks Earth will face in the future, and a "backup planet" is yet to be found. It might be too remote to think about problems like a doomsday crisis and interstellar migration, but it will be promising for humanity if competent and responsible countries, including China, continue to develop space technologies and promote space exploration.