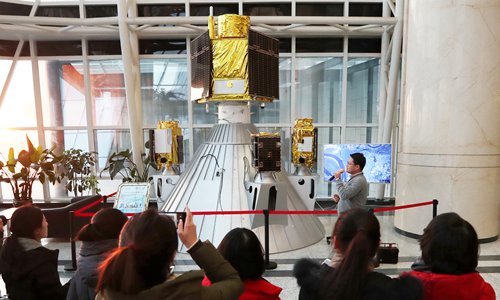 Facing a tough time in its traditional industrial sectors, Northeast China's rust belt has its eye on aerospace.The three provinces in the region, previously known as China's industrial base - Jilin, Liaoning and Heilongjiang - have been focused on cultivating an aerospace industry and analysts said they are well-positioned for that."Northeast China not only has a long history of being an industrial base, it also has well-established aerospace and aircraft enterprises, such as Chang Guang Satellite Co, Shenyang Aerospace Xinguang Group, and AVIC Harbin Aircraft Industry Group," said Huang Zhicheng, a professor at the Beijing Institute of System Engineering.He added that universities and research institutions that specialize in the aerospace industry could also provide talent to empower the industry, namely outstanding institutions like the Harbin Institute of Technology and Shenyang Aerospace University. Chinese private-sector rocket company, OneSpace, also agreed that the northeast region has developed an industrial base and has huge potential to develop the space industry. Jing Junhai, governor of Jilin Province, has prioritized the Jilin-1 satellite network project and said the province will strive to develop the satellite and aerospace industry in 2019, the Economic Information Daily reported on Monday. The Jilin-1 constellation was developed in Jilin Province, and it is the country's first self-developed remote sensing satellite for commercial use. Another provincial project called Jinqu Space aims to deliver more than 35 high-performance small-scale launch vehicles every year once the first phase of the project is completed. It will also build capacity for the production of major aerospace components, according to the report. Chang Guang Satellite Co in Jilin has been working on space-related technology since 2014. Lin Hongtao, the company's marketing representative, told the Global Times on Monday that for the Jilin-1 project, 138 satellites are expected to be put into orbit by 2030. Twelve are already in service.He added the company has enjoyed preferential policies provided by the local government including land and electricity supply. In the meantime, the company has been providing jobs and helped boost economic growth in the region.Lin added that Chang Guang Satellite has created synergy effects with smaller local companies that specialize in related areas, such as drone design and remote-sensing technology. The company is based in the Changchun North Lake Technology Park in Jilin Province, where smaller aspiring technology companies are cooperating with Chang Guang to develop their own businesses. Another northeastern province, Heilongjiang, is also a strong competitor in the space industry. With a prominent national leader in aerospace education, the Harbin Institute of Technology, the province aims to accelerate cooperation in the aerospace industry and Beidou Navigation Satellite System with other military industrial groups and universities, said Heilongjiang Governor Wang Wentao, according to the Economic Information Daily report. Huang noted the top officials of the two provinces have an aerospace background, which might be a reason to develop the provincial space industry. For instance, Zhang Qingwei, Party chief of Heilongjiang, was the general manager of China Aerospace Science and Technology Corporation between 2001 and 2007. In addition to Jilin, other provinces such as Southwest China's Sichuan and Central China's Hubei are also seeking to develop local aerospace industries to seize new opportunities in emerging industries, the Economic Information Daily article said.Huang said that if "the three provinces show an open attitude and supportive policies toward private space companies like southern cities in China did, I believe both the local and other space enterprises will embrace the region."