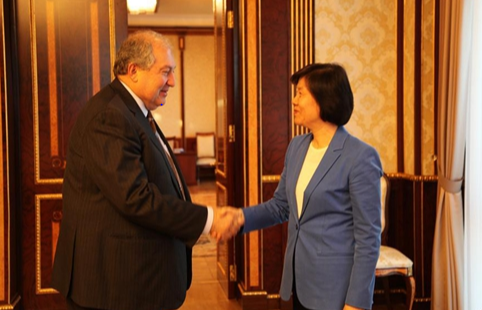 A delegation led by Shen Yueyue, vice chairwoman of the Standing Committee of the National People's Congress (NPC) of China, wrapped up a three-day visit to Armenia on Saturday. During the visit at the invitation of the National Assembly of Armenia from Thursday to Saturday, Shen met respectively with Armenian President Armen Sarkissian, Prime Minister Nikol Pashinyan, President of the National Assembly Ararat Mirzoyan and held talks with Vice President of the National Assembly Lena Nazaryan. In recent years, China and Armenia both witnessed a healthy and steady growth of friendly ties, and closer cooperation in such areas as economy, trade, infrastructure, and people-to-people exchanges, Shen said during her meetings with the Armenian top leaders. China respects Armenian people's independent choice of development path, highly appreciates Armenia's firm support on issues concerning China's core interest and major concerns, and will join hands with Armenia to take the opportunity of jointly building the Belt and Road to deepen practical cooperation in all fields, so as to benefit peoples of the two countries, Shen said. Shen also called on the legislative bodies of both countries to keep close contact and deepen cooperation, and to make positive contributions to the continuous advancement and further development of the bilateral ties. The National Assembly and government of Armenia would firmly adhere to the one-China Policy and thanked China for its support to the economic and social development of Armenia in all these years. They are willing to deepen cooperation with China in jointly developing the Belt and Road, further promote exchanges between parliaments at all levels and lift the bilateral ties to a new level.