Prospects for China’s online food delivery market look promising, with more users and services than ever, as well as improved regulations governing the industry.

As of June 2021, 469 million people had previously ordered food delivery services online, an increase of 49.76 million from last December, as revealed in a recent report released by the China Internet Network Information Center. 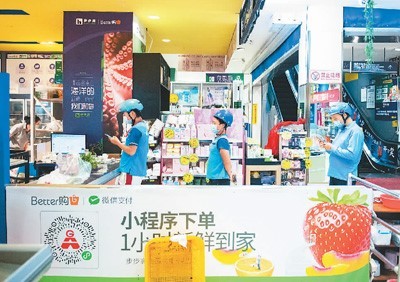 Couriers queue up to pick up products ordered by clients in a supermarket in Zhangjiajie city, central China’s Hunan province. (Photo: Xinhua)

At present, what’s being delivered in China is not only food, but also a variety of other products. After placing orders on the phone through Instant Shopping, a quick delivery arm of the Chinese food delivery giant Meituan, you will receive your wanted products, including drinks, snacks, fruits, vegetables, fresh flowers, medicine, digital products and books, in 30 minutes to two hours.

Statistics indicate that in the second quarter of this year, Instant Shopping’s transaction volume and value increased by more than 140 percent from the same period last year, respectively.

On Eleme, another leading Chinese food delivery platform, orders for medicine surged by 130 percent in July and August year-on-year. Nearly 5,000 pharmacies in over 500 cities across the country have started 24-hour “take-away medicine” activities on the platform.

In addition to product delivery, Chinese food delivery platforms also run all kinds of errands for urban dwellers, who lead a hectic lifestyle.

These platforms have also provided digital tools for self-employed and small and medium-sized business owners to accept orders and assign them to couriers according to the time when meals can be served.

A restaurant owner surnamed Li in Wuhan, central China’s Hubei province, is one of those to have benefited from the tools. He said that at the beginning, he had to record orders manually on his phone, which sometimes led to mistakes. Thanks to the tools, Li is now able to automatically accept orders, which reduces mistakes to the maximum degree possible, while couriers are now able to be notified about the exact timing for fetching food.

“Business has grown significantly after the application of the tools,” Li said excitedly.

Furthermore, China is promoting the well-regulated development of the food delivery industry. Seven ministries, including the State Administration for Market Regulation, released a guideline recently that called for the better protection of food delivery workers’ rights in areas including salaries, workplace safety, working environment, and dispute settlement.

So far, over 6,000 restaurants in the province have joined the system, through which regulators and consumers can also watch the food preparation process at these restaurants in real time. The system has also gathered and compiled data on approximately 339,000 delivery riders and 293,000 restaurants accessing the online food delivery platforms.