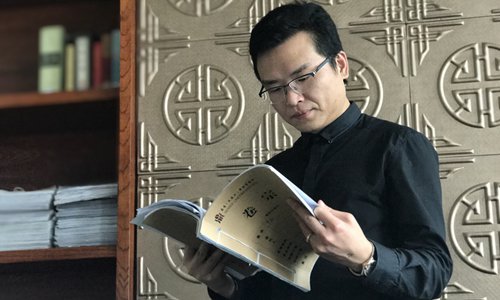 Tang Shuai examines a case file in his office in Chongqing. (Photo: Courtesy of Tang Shuai)

Tang Shuai's social messaging app WeChat almost crashed recently after thousands of people sent him invitations hoping to befriend him. All these aspiring WeChat friends had one thing in common: they are deaf.After he was featured in a video by the legal authorities of Dadukou district in Chongqing, calling him the only sign language lawyer in China, thousands of deaf people immediately sought him out for legal assistance. Some had been caught in financial scams, some were filing for divorce, and others had been sued and needed a lawyer to defend them.After working as a sign language interpreter in Chinese courts for six years, Tang, 34, passed China's judicial examination and became a lawyer in 2012.Since then, he has spent most of his time fighting for the legal rights of the deaf and promoting legal awareness among the deaf community.World of silenceBorn to deaf parents, Tang has normal hearing but grew up in a largely deaf environment. Most of the friends and colleagues of his parents, who worked at the same factory, were deaf. Since he was young, Tang's father has wanted him to break out of this social bubble, sending him to live with his grandmother so that he could have people to talk to. They were even against him learning sign language, even though that meant he would not be able to communicate with them.Despite his father's objections, Tang still managed to master sign language. And living in that world also gave Tang a clear understanding of the plight faced by many deaf people in China. One particularly stark example of how deaf people lack legal awareness involved his neighbor, a deaf woman, who died after an operation at a local hospital. Her deaf husband and friends, angry about the operation result, blocked the hospital entrance in protest. As a result, the hospital refused to admit deaf patients for years. Tang's mother was also refused when she suffered a stroke.Legal disadvantageIn 2005, Tang was enrolled by the Southwest University of Political Science & Law and majored in law. At the same time, he worked as a sign language interpreter in Chongqing's courts and witnessed first-hand the disadvantaged position deaf people could find themselves in, whether they were plaintiffs or defendants.There are over 20 million deaf and hard-of-hearing people in China - that's about one in every 65 of the population. However, when this group encounters legal problems, there are few people they can go to for help.In his six years as a sign language interpreter, Tang did not encounter one lawyer who understood sign language in China. While Chinese courts do hire sign language interpreters, language barriers still exist.Sign language in China can be roughly divided into two categories: natural sign language, which deaf people use in their own communities and are passed on through generations, and a standardized sign language which is promoted by the China Disabled Persons Federation. Most deaf people in China use natural sign language, as the latter requires systematic learning.China's court sign language interpreters, however, are mostly able-bodied people who use the standardized sign language. This results in language barriers in court even with the presence of interpreters, who sometimes have to guess what a deaf person really means. Tang, who understands both forms of sign language, often cites one case in which an elderly lady sought his help to illustrate how interpreters can sometimes influence cases involving deaf people. According to court records, the lady's daughter had pled guilty to stealing an iPhone, but told her mother that she didn't do it. Tang viewed video recordings of the case and found that the court interpreter had misinterpreted her daughter's sign language: she said, "I didn't steal," but it was interpreted as "I stole a golden iPhone.""This case touched me a lot, and it was one of the reasons that I wanted to shift from being an interpreter to a lawyer. Interpreters should give voice to deaf people, but it's difficult to make sure that they fully understand them," he said.In one court hearing, Tang found that the interpreter had ignored the part notifying the deaf defendant of his litigation rights and the rules in court. He quickly interrupted the interpreter and pointed out the mistake. "I hope that as a lawyer who actually understands sign language, I can be a line of defense against wrongful convictions," he said. Training groundOverwhelmed by how much legal consultation deaf people needed and taking into consideration the lack of legal professionals who understand sign language in China, Tang decided to train deaf people who are interested in becoming lawyers and legal consultants.Last year, Tang started to look for deaf people with relatively good educational backgrounds. He has now hired five deaf graduates from Chongqing Normal University, and is now training them to provide legal counseling to the deaf.Five months into her job, Tan Ting, 25, one of Tang's newly hired legal assistants, has studied civil law and marriage law and is now providing legal assistance to deaf people through video calls. Tang also established a WeChat public account which acts as a platform for deaf people to seek legal assistance. Recently, he launched a new sign-language video series on law education. In the first episode, he explains what a Ponzi scheme is, as he found that a lot of deaf people had fallen victim to such schemes.For each video, he makes two recordings, one in sign language and one in which he speaks Putonghua. This legal education has taken up most of Tang's spare time, and he shows no sign of stopping. "If there really is only one sign language lawyer in China, then I would feel guilty if I wasn't doing this."