CHINA China's opening up in 40 years: from 'Made for China' to 'Made with China'

China's opening up in 40 years: from 'Made for China' to 'Made with China' 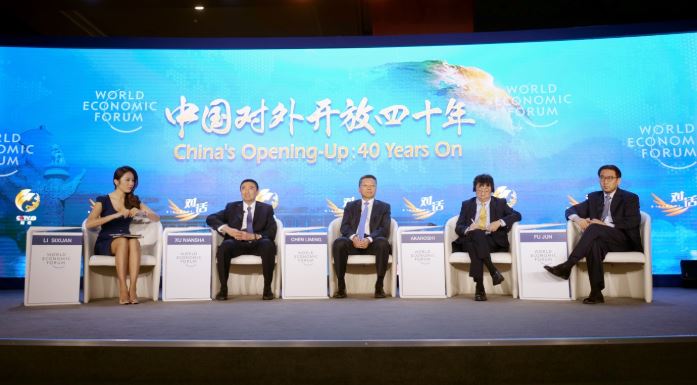 China has transformed its way of opening up from "Made for China" to "Made with China" over the past 40 years, panelists said at the Annual Meeting of the New Champions on Tuesday.

The country has gone through three stages during the opening up, from "Made for China", "Made in China" to "Made with China", according to Chen Liming, Chairman of Greater China Group at IBM Corporation.

In the early stage, "foreign companies brought products to China through trade… and China in turn learned technology, marketing, corporate governance and international rules through the products," said Chen.

Xu Niansha, chairman of Poly Group: China not only brought equipment from abroad, but also learned knowledge and rules during opening up.

“In transitioning from a planned economy to market economy, from a closed domestic market to opening up, what we need to do was to challenge the differences,” said Xu Niansha, chairman of Poly Group.

Chen Liming, chairman of Greater China Group at IBM Corporation: The difference between Chinese and foreign businesses is not strategy, financial statement and even technology which can be eliminated through talks, but culture.

In the second stage, “China did processing and exports,” said Fu Jun, academic dean and professor at  Peking University's School of Nannan.

“But then we got a certain scale level of the market, and many transnational companies shifted their production capacity to China,” said Chen.

“The main driving force for foreign companies to enter China is the huge potential market that is extremely attractive to any business,” added Chen.

Fu Jun, academic dean and professor at  Peking University's School of Nannan: China considered how to combine its resources, land and labor with developed countries' technology to improve its products' quality.

“The market is even more attractive than the cheap labor,” said Chen.

“[China's labor force] is completely different now. It is not cheap labor any more. If we are to make in China, maybe it's cheaper to make in Japan now. Lots of Japanese companies are entering China because of the huge consumers' market in China,” said Akahoshi.

When Ferrari planned to enter the Chinese market in 2004, it chose to set up a joint venture with Poly Group, according to Xu.

Yasushi Akahoshi, president of Japan External Trade Organization: There could be mutual exchanges between Chinese and Japanese businesses. China and Japan could cooperate on aspects like mobile payment in which China is much more advanced than Japan.

In 2016, foreign investment in China surpassed the country's outbound investment for the first time.

Fu: China's private enterprises have played an important role in opening up. They roughly contributed to 60 percent of GDP, 80 percent of exports, 90 percent of employment, but only received 20 percent of credit loans. The percentage should be reconsidered in further opening up.

The World Economic Forum (WEF) held the Annual Meeting of the New Champions under the theme “Shaping Innovative Societies in the Fourth Industrial Revolution” from Tuesday to Thursday in Tianjin. Over 2,000 participants from 111 countries are at the meeting.