Posting photos of oneself 10 years ago next to a recent one shows how much people have changed - wrinkles, receding hairline, mature temperament and changing from student to mothers and fathers. 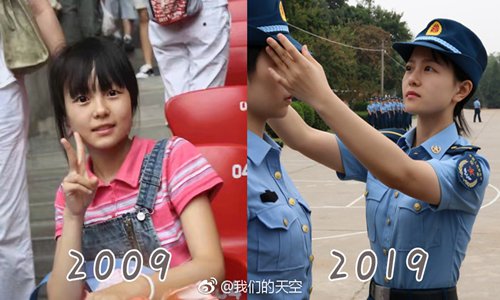 Airborne troops of the Chinese People's Liberation Army post photos for the 10-Year Challenge on Sina Weibo, with one photo featuring a female soldier changing from a young girl to a soldier. (Photo: The official Weibo account of PLA 95829 troops)

As the "10-Year Challenge," or the 2009 vs 2019 challenge, has become a viral meme on Chinese social media, Chinese people are reflecting on bigger changes of the country, which include the development of 5G, bigger online shopping data, increased high-speed railway mileage and more frequent and convenient online delivery services.

In January 2009, China officially entered the era of 3G with the number of registered users in the tens of millions, and in 2019, China piloted the application of 5G and mobile devices with 5G technology are about to be sold, according to a post by People's Daily on Sina Weibo on Sunday.

China started the mobile payment service in 2009 but after 10 years, paying by scanning a QR code has become commonplace.

China landed a rover on the far side of the moon in 2019, 10 years after the country began its lunar exploration, the post said.

As the People's Daily concluded, 10-Year Challenge events have been participated by not only ordinary people, but by Weibo accounts of official departments, media and celebrities and topic ranges from personal changes, to games and cosmetics. Terms such as "10 years,"  "life,"  "young,"  "body,"  "cities" and "times" are the most frequent used words.

As most netizens post photos of themselves on social media to show their personal changes, groups of Chinese hail their career of serving the country by posting photos online of their identity from students to firefighters, armed police, police officers, and technicians in aerospace fields.

People who guard the country are the pride of the nation and participants of Chinese development, netizens said and paid their respects to people who contributed their youth to the country.