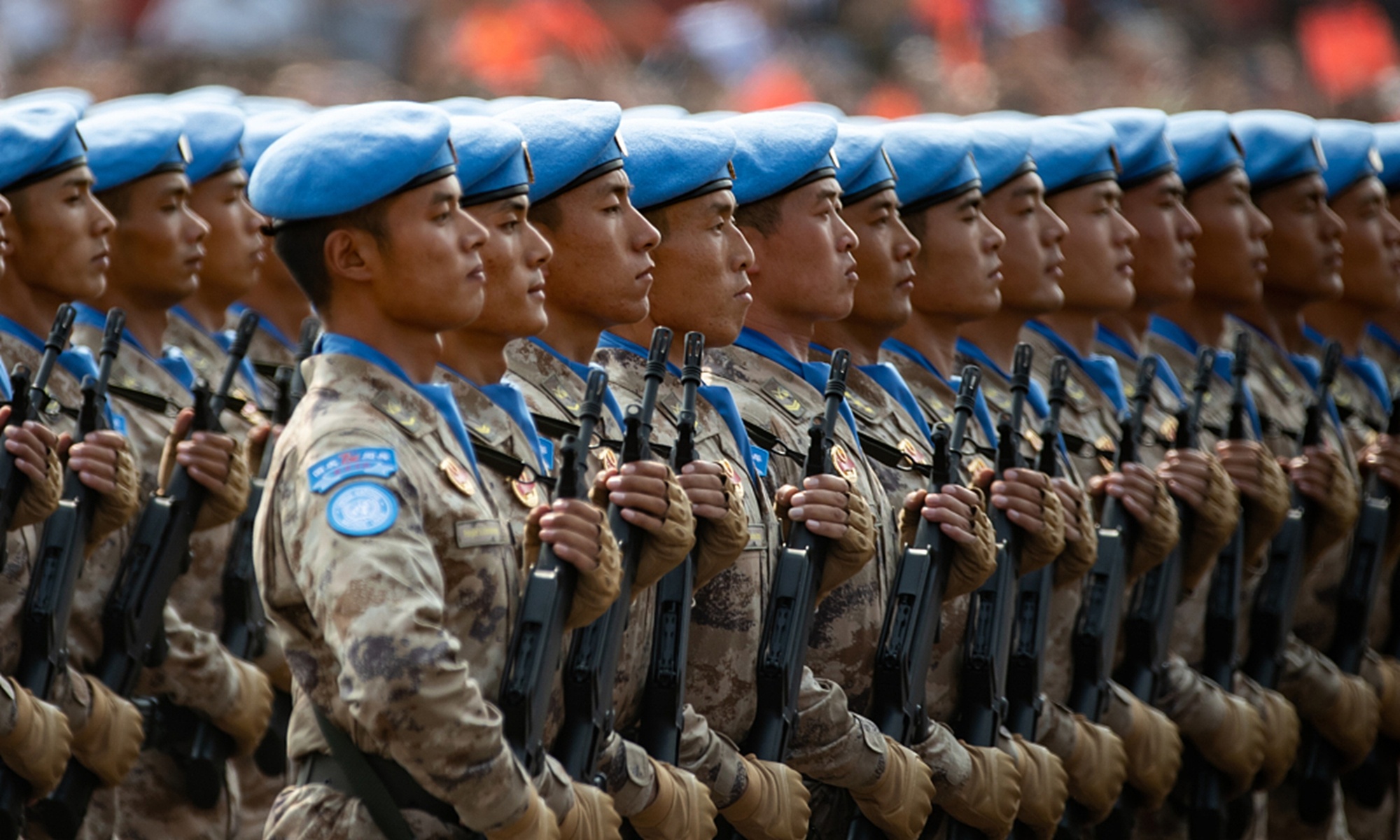 Holding an F-1 grenade which had the safety plug pulled out and could explode any moment, Zhang Kai, a Chinese peacekeeper in South Sudan, experienced the heart-stopping 30 minutes that he would never forget in his life.

Without  one-second hesitation about his personal safety, Zhang decided to move the deadly device away from the populated area of the third refugee camp in South Sudan to a safe zone as soon as possible, together with a Russian counterpart. Luckily, he completed the dangerous mission safely.

"I was not thinking much. I was nervous but not afraid," Zhang told the Global Times at a hotel on Wednesday in Beijing where he was under quarantine after returning from the African country.

But that incident on December 13, 2018 was not unusual for this peacekeeper from East China's Anhui Province, who had handled many equally risky and urgent tasks during his more than two years' mission.

Normally, a UN peacekeeper is only stationed in a country for one year. But due to Zhang's outstanding performance, he was asked for an extension.

Zhang, a member of the crime branch of the Luyang Sub-Bureau of Hefei Policy Bureau in Anhui Province, is one of the 2,630 police officers China has sent as peacekeepers in the past 20 years. The Chinese police team, who helped protect civilians and deal with unrest, have become a mainstay in the UN police peacekeeping operations.

Yu Chengtao, a deputy director general of the Department of International Cooperation of the Ministry of Public Security (MPS), told media on Wednesday that the Chinese government has accepted the request of the UN and would send a 160-member permanent peacekeeping police team to Abyei in Sudan soon. This would also be the first deployment of China's permanent peacekeeping police team.

Yu told the Global Times that they have arranged COVID-19 vaccines for all the 160 members.

Yu said that the Chinese police have brought their strict discipline, excellent operational skills, advanced policing experience and technology to the UN peacekeeping mission areas. China's participation in the UN peacekeeping operations has also been widely recognized and praised by the international community.

"This year, in particular, they [the Chinese police peacekeepers] have been engaged in peacekeeping work under the special circumstances of the COVID-19 pandemic. They have overcome many environmental and psychological difficulties, effectively completed their tasks, and gained wide recognition from the relevant departments of the UN. They have made sacrifices and contributions to the maintenance of world peace," he said.

The Global Times has learned that the permanent team was conferred the highest Raid Deployment Level (RDL) award.

Lu Cong, a deputy director of the Department of International Cooperation of the MPS, told the Global Times that normally the task of selecting peacekeeping police is entrusted to the public security organs of a province. After the training and primary selections are conducted at the provincial level, the MPS will conduct another round of selection in accordance with UN's assessment criteria. Candidates passing the selection will then undergo intensive training for two to three months before taking the final exam.

"There are about three rounds of selection," he said.

Lu noted that a qualified police peacekeeper needs to have a long list of essential qualities: a good command of policing and foreign languages, the ability to communicate and work under pressure, psychological resilience in the face of adversity and professional ethics.

In addition to sending peacekeeping police overseas, the MPS also organized training workshops and seminars for foreign police. Many of them have come to China to participate in training sessions.

The goal of organizing training sessions is not just to improve policing - its more about sharing the values of equality and diversity.

He Yin, an associate professor with the China Peacekeeping Police Training Center of the People's Police University of China, recalled that at a workshop in 2016, a student from an African country told him earnestly, "I like your country so much."

When asked about the reason, the student said "I studied in a Western country for five and a half years. But they never treated me as an equal. In China, you treat me as an equal. I feel so happy and have made fast progress in my study."

Since then, He noticed that when some students would have a chat over the break and not return to the class on time, the African student would come out and say, "Come back to class, we are not in China for chatting."

"This police officer has a long career ahead. I'm sure that what he has learned in China will reflect in his future work in his home country," He said.

While China has been actively engaged in the UN peacekeeping missions, its good intentions are maliciously interpreted as protecting its own interests and expanding its influence by some Western observers.

When asked about how to see this, Lu said such interpretations show that the lack of basic knowledge of the UN peacekeeping missions. He noted that it is the UN that sends a request to member states to send peacekeeping troops or police to the troubled regions in accordance with UN resolutions.

"It isn't what China wants to do. China just sends peacekeepers at the request of the UN when a crisis happens,"he said.

"When we send peacekeepers on a mission, we do not choose to go where our interests lie. That is impossible. Even if some peacekeeping areas happen to have Chinese businesses and expatriates, it is only by chance," Yu said.

"At the same time, China is a peace-loving country and willing to contribute peacekeepers to the UN. The UN also needs Chinese peacekeeping police," Yu noted.