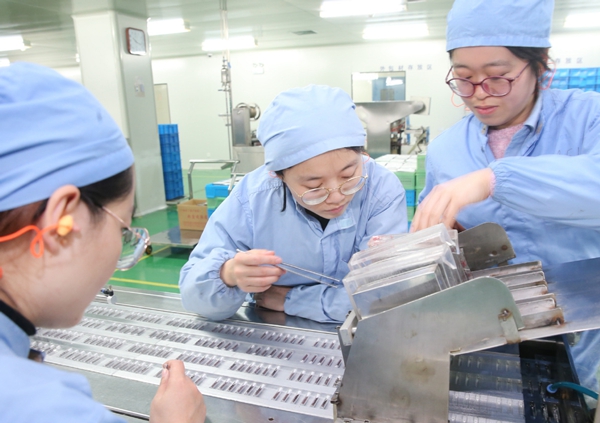 China's pharmaceutical market has been constantly growing in recent years, and is estimated to reach $161.8 billion by 2023, taking a 30 percent share of the global market, said an industry expert.

Fu Xudong, senior vice-president of global pharmaceutical giant Bristol-Myers Squibb, said during the recently concluded World Innovators Meet 2019 held by Equal Ocean, that China has become the world's second-largest pharmaceutical market, following the United States. In 2018, its pharmaceutical market totaled $127.9 billion, growing 2.4 percent on a year-on-year basis. The market is expected to maintain the growth momentum with an average annual growth rate of 5 percent in the coming five years.

China's new drug development has begun to catch up in the fields of tumors, diabetes, and antibiotics, Fu added.

In recent years, the Chinese government has introduced a series of policies to narrow the pharmaceutical innovation gap between China and other leading countries. The policies include developing multinational clinical centers, sharing clinical data globally, accelerating the approval process of special medicine, and enhancing the protection of clinical data.

Industry data showed that after the acceleration of innovative drug access, the drug approval speed increased by 62 percent. In terms of biologicals, newly approved biologicals in 2018 surged by 450 percent compared to that of 2017. The process from material submission to final approval now only takes six months.

"China's traditional drug research and development pattern, which was dominated by generic drugs, is undergoing transformation, and new drug development has ushered in new opportunities. From the perspective of supply and demand, the pharmaceutical industry will continue to be one of the main driving forces for investment in China's primary market," said the report.

In recent years, China's demand in the pharmaceutical market has boomed. According to data issued by industry research website chinabaogao.com, in 2018, the terminal market volume of China's pharmaceutical market reached 1.7 trillion yuan ($242.9 billion), 6.3 percent higher than the same period in 2017.

"In the future, demand, policy, and capital will serve as the troika of China's pharmaceutical development," Fu from Bristol-Myers Squibb said.

On Nov 28, the National Healthcare Security Administration announced a total of 70 new drugs that will be included in China's national medical insurance catalog, with their prices slashed by 60.7 percent on average. During the negotiation process, for the first time, there was a situation where Chinese and foreign companies competed on the same stage for innovative drugs in multiple therapeutic areas, such as anti-HIV and anti-hepatitis C.

Market insiders said that because of the rapid rise of local innovative drugs, the monopoly position of new drugs imported exclusively from overseas in the past had been challenged.

"The implementation of the value-based strategic purchase of the national medical insurance program is the future trend of the pharmaceutical industry. The clinical research of new drugs must not only take into account market demands, the policy direction of market access should also be considered," she said.