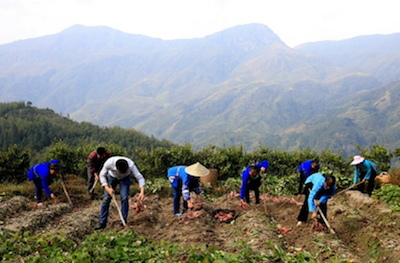 Poverty alleviation in China is an important part of global efforts to eradicate poverty. Chinese President Xi Jinping has once again urged all out efforts to win the tough battle against poverty and make new progress in the process of building a moderately prosperous society.

In the 18th CPC National Congress, the blueprint for the future was made clear which was to double the 2010 GDP and per capita income for urban and rural people by 2020 and to build a moderately prosperous society in all aspects by lifting impoverished people out of poverty.

China said its rural population living in poverty was reduced from 770 million to 55.75 million between 1978 and 2015. An additional 12.4 million were lifted out of poverty last year.

Data shows 55.64 million people were lifted out of poverty, or an average of 13.91 million per year, resulting in a reduction of poverty incidence from 10.2 percent in 2012 to 4.4 percent last year, which is one of Xi’s big achievements in the last five years.

The success of the poverty alleviation campaign have been achieved by adopting the targeted measures in rooting out poverty.

If we look back to the 16th CPC National Congress in 2002, the rural poor population has dropped significantly, and the problem of inadequate food and clothes has been minimized. Meanwhile, various policies and measures beneficial to the development of poor people, such as infrastructure and industrial development, labor training, subsidies to the agricultural sector, assistance in education and health care, have made them more self-reliant as the focus of the campaign shifted from providing direct assistance to fostering their abilities and self-reliance.

The 19th CPC National Congress session will be a great testament to people who have contributed to achieving the targets. The 20th Congress will be paying tribute to the delegates in 2022.

China has achieved the target of reducing its poor population consistent with the United Nations Millennium Development Goals, far ahead of schedule.

China has a wealth of experience to share with the world in wiping out poverty as it is the first country to fulfill the MDGs. The achievements of China in poverty alleviation have opened doors for developing economies to learn from the experiences of China and to adopt such targeted policies for getting rid of poverty, which has become the toughest battle for all.

The international community is focusing on China because China is emerging as a moderately prosperous society, and advances its position as a prosperous, democratic and culturally advanced socialist modern country and is bravely plunging into international affairs.

(The author is a Pakistani correspondent based in Beijing)