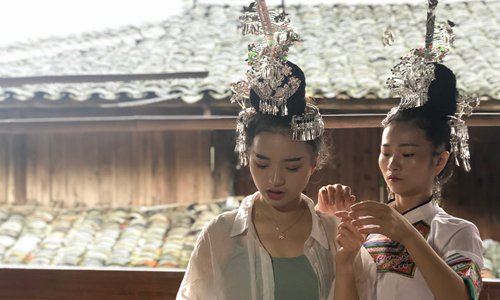 As the first sunlight penetrates the dense mist of Gaibao Village, seven girls are busy putting on silver jewelry and dainty headwear to prepare for their daily meeting with about 1 million Chinese fans.
For hours, they will use a smart phone to live broadcast themselves operating looms, catching fish in rice paddies and answering inquisitive questions about this mountain village in southwest China's Guizhou Province.
But while raising eyebrows and grabbing attention on China's bustling social media, the "Seven Dong Fairies," named after figures from local mythology, know their real job is fighting off poverty in their village.

With a loyal following, the seven have the magic touch of turning every farm produce entering their videos into online bestsellers, from traditional Dong garments to salted fish. Last year, when local farmers struggled with lagging sales of their ginger, the fairies touted them online, and the ensuing influx of orders dissolved the village's ginger stock within a month.
"The seven fairies are part of our poverty relief drive," said Wu Yusheng, the Party chief of the village, who came up with the fairy idea. "With their help and government support, the village was removed from the list of poverty-ridden areas last year."
Gaibao Village, once classified as a "deeply impoverished area," represents the grassroots ingenuity and flexibility of China's anti-poverty campaign as it steers into the country's least developed areas.
Answering the central leadership's call for "precision poverty alleviation," which demands adjusting policies to suit different local situations, such local-level wisdom is powering up China's battle to wipe out absolute poverty by 2020. OUT OF COMFORT ZONE
As the first developing country to pass the poverty reduction mark in UN Millennium Development Goals, China has slashed its population living in poverty by more than 700 million since 1978, when the reform and opening-up drive was launched.
Its anti-poverty campaign entered a fast lane between 2013 and 2018, when about 82 million people in China's countryside cast off poverty. At the end of 2018, China's rural population living under the national poverty line of 2,300 yuan (327 US dollars) in annual income was down to 16.6 million.
But what remains of the mission is said to be the toughest. According to the State Council Leading Group Office of Poverty Alleviation and Development, nearly half of China's impoverished population now come from areas of extreme poverty.
Experts said these areas feature weak industry foundations, adverse natural environments and poorly educated populations that lack motivation. Tackling poverty there forced China to walk out of its comfort zone.
"What face China's poverty alleviation campaign now are the poorest of the poor, who can hardly pull themselves out of the mire by simply receiving transfusion of funds and resources," said Sun Zhaoxia, professor and researcher on poverty reduction at Guizhou Minzu University.
"Apart from 'blood transfusion,' China is building 'blood production functions' for these areas, with measures including developing industries and promoting education," she said.
The central government has announced it would allocate 214 billion yuan from 2018 to 2020 to places where abject poverty still persists. More resources have also been promised to support various anti-poverty initiatives, including financial and ecological anti-poverty approaches and the establishment of area-specific industries.
Liu Chengliang, researcher on rural poverty reduction with Soochow University, said the precision approach not only pools resources for the nation's poverty fight, but also prioritizes troubleshooting and allows for pragmatism.
"In practice, local governments are allowed to flexibly adjust policies to suit local conditions. As a result, some advanced governance ideas can take root in the underdeveloped areas," Liu said. BRING BACK TALENT
In mountainous Guizhou, one of China's least developed provinces, stories abound of local innovation turning the outpour of national support into self-development.
In the "deeply impoverished" county of Zheng'an, favorable tax and land policies were put in place to nurture a guitar industry, which has led 6,640 local people out of poverty with employment.
The agricultural county's relationship with the musical instrument began in the 1980s, when many villagers, fleeing grinding destitution, flocked to guitar factories in other cities. Then starting in 2013, officials strived to woo back some uprooted locals, as well as their investments and skills.
"We thought (back then) why not bring back home our fellows, so we would have all the technologies and skilled personnel to start a guitar industry of our own?" said Deng Zhaotao, the county's Party chief.
"There is no fixed pattern for poverty relief. The key is encouraging the locals to do what they are good at," said Huang Ying, chair of the women's federation of Zhijin County in Guizhou Province.
In 2017, the China Women's Development Foundation invited professional designers to create more marketable patterns for Zhijin's batik and embroidery workshops. Then upon the calls of the local government, many local women, after years of toiling in factories in other cities, returned home to engage in traditional craftsmanship.
Wu, the Party chief of Gaibao, believes keeping the youth is key to their future rural revitalization plan, especially after poverty was consigned to history.
His fairy team recently recruited a college graduate, who had worked in the e-commerce sector in Hangzhou City, hoping her expertise could promote online sales of local farm produce.
"For years, villagers strived to move out of the mountains to improve their livelihood. Now, we are glad to see the development of our hometown is drawing back locals, especially college graduates," said Wu.