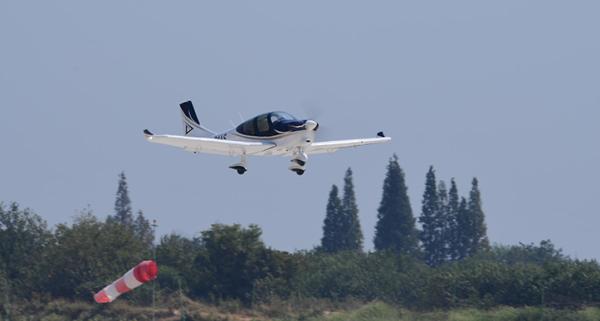 The plane took off at 11:53 am at Yaohu Airport in Nanchang, the capital city of China's Jiangxi Province. After three minutes, the plane reached 1,000 feet, and finished the established flight subjects within 26 minutes. The plane landed at 12:19 pm, successfully completing its first show.

Developed by Guanyi Aero in Shanghai in 2015, it took three years from the start of the project to the plane's first show. The pilot on the first flight was Christian Briand, a top pilot who worked for SOCATA, French producer of general aviation aircraft.

Equipped with a global famous engine and avionics system, GA20's wings are 9.4 meters long and the plane is 8.1 meters long. The plane can be used for various purposes, including flying training, private flight, touring, etc.

The maximum mileage range of GA20 can reach 1,200 km, at a cruising speed of 265 km per hour. Under the condition of 75% of power at an altitude of 2,600 meters, its fuel consumption rate is only 32 liters per hour, making it competitive amongst similar planes in the world.