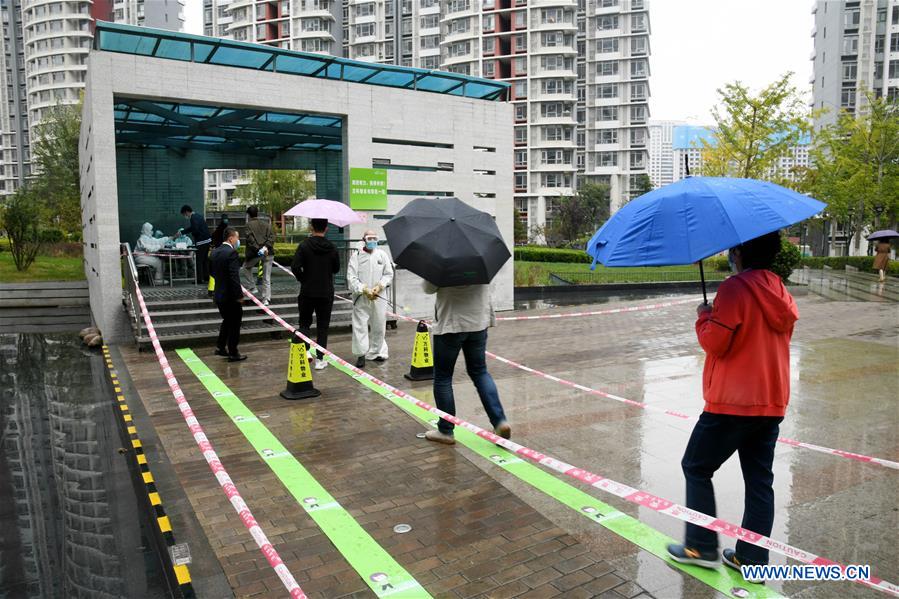 As of 8 a.m. Thursday, more than 9.94 million people had been sampled, while over 7.64 million of the collected samples had been tested. Except for the cases already reported, no new positive samples have been detected.

The virus, which recently re-emerged, has led to the discovery of 13 new confirmed cases of COVID-19 by Wednesday. Most of the new cases are linked to the Qingdao Chest Hospital, which had been used to treat imported COVID-19 cases.

Deng Kai, president of the hospital, was removed from post following the outbreak. Sui Zhenhua, director of the Qingdao municipal health commission, was suspended from office.

Starting from 7 a.m. Monday, the residents of a community in Qingdao's Shinan District began to line up at a testing point to receive nucleic acid testing.

"We waited about 20 minutes before getting the testing. It was a responsible move for the good of ourselves and for others as well," said a local resident surnamed Wang.

The city has set up more than 4,000 sample collecting points across the city, most of which are open between 6 a.m. and midnight. More than 10,000 medical workers have been mobilized.

"Hello. Just open your mouth wide and don't be scared," said Su Miao, a 42-year-old doctor while squatting to collect a child's sample with a throat swab.

"Children can get nervous and we must comfort them to make sure we get the samples as soon as possible," she said.

Du Xiaoxuan, a nurse dispatched from Zibo city, about 270 km away from Qingdao, arrived in Qingdao at noon on Tuesday and collected more than 200 samples with two colleagues on their day of arrival.

"China has controlled the epidemic well. This is a hard-won achievement that we must safeguard," said Du.

To ensure the citywide testing can be completed in five days, five cities in Shandong Province, including Zibo, Yantai, and Rizhao, have joined hands with Qingdao to help conduct nucleic acid sampling and testing, and more than 1,200 people have been dispatched from outside to the city for assistance, said Chen Wansheng, an official with the municipal government of Qingdao.

Some of the samples from Qingdao were transported to the five neighboring cities for testing, as Qingdao has limited equipment and the samples must be tested within 12 hours, Zhao Guolei, deputy director of the municipal health commission, told Xinhua.

QR scanning has been used at some sample collecting points to replace paper registration to cut the waiting time and lower the risk of spread of infection.

Some communities have called in medics to provide door-to-door sampling for old people with restricted mobility.

Lin Zhenmao, 81, had his throat swab collected at home Wednesday afternoon. "My father is in poor health and has difficulty going downstairs. The community's door-to-door service was a big help," said Lin's son.

A 10-in-1 mixed testing approach has been adopted to improve efficiency, according to Zhang Huaqiang with the municipal center for disease prevention and control.

"If a 10-in-1 sample is positive, we will inform the 10 people to undergo separate isolation and testings to further identify the carrier of the positive sample," said Zhang.

With the 10-in-1 approach, the lab alone can test samples of 400,000 residents a day, according to the company.

After all of the over 600 employees had been tested for nucleic acid, Kim Songyong, vice general manager of a Sino-Korea joint venture in Qingdao, looked relieved.

"I was worried that our factory may have to be closed when I saw news of the new cases, but the timely citywide testing calmed everyone down," said Kim.