China's rail network gets boost; more tracks to be high-speed 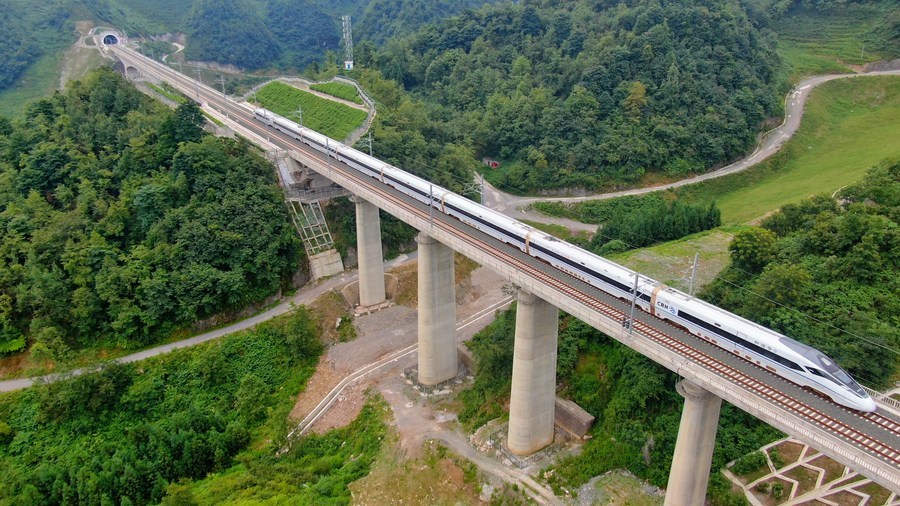 China aims to raise its global competitiveness in the railway sector by expanding its railway networks with wider coverage and higher speeds, according to the country's top railway operator.

The nation plans to build 200,000 kilometers of railway by the end of 2035, including about 70,000 km of high-speed tracks, according to the latest national railway plan, issued on Wednesday by China State Railway Group.

As of July, the country's railway network topped a total length of 141,400 km, among which 36,000 km were high-speed railways, already being in the front rank of the world, according to the company.

The plan also said that by 2035, the country will build a travel system to limit commutes within cities to one hour. Travel times within city clusters would be limited to two hours and between neighboring provincial capitals or city clusters to three hours.

Systems for speedy logistics will also be completed to strengthen domestic goods delivery within three days at most, the company said.

To facilitate the goal, China has also intensified its efforts in research and upgrading of conventional train service to a speed of 400 km per hour and above. It also is working on the next-generation magnetic-levitation train with a top speed of 600 kph.

The maximum speed of China's current bullet trains rose to 350 kph when the Fuxing (Rejuvenation) bullet trains started operating between Beijing and Shanghai in 2017. The country's maglev train conducted a successful test run in June, reaching a designed speed of 600 kph.

Research and development of high-speed freight trains and 30,000-ton heavy-duty trains, as well as new special trains for standardized containerized freight, cold chain logistics and cross-border freight transportation will also be speeded up, the company said.

Zhao Jian, a professor at Beijing Jiaotong University who researches rail economics, said that the construction of the railway, especially high-speed tracks, in the past decades has saved travel time, as well as helped integrate the regional economy, boosted the flow of talent and information and reshaped China's economic map.

"China's railway passenger and cargo transportation is still seeing steady growth due to their positive characteristics of high capacity, high speeds and eco-friendliness, and the expansion plan of railways should be moderately ahead of the current needs," he said.