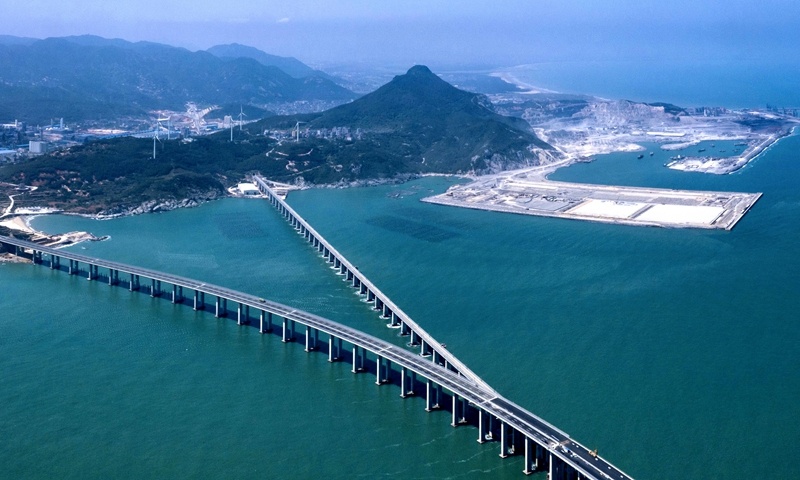 An aerial photo shows the Pingtan Strait Road-rail Bridge in East China's Fujian Province. The first of its kind in China, the bridge opened on Saturday, shortening travel time between the provincial capital of Fuzhou with the island county of Pingtan to 35 minutes from around two hours. The bridge will make it more convenient for compatriots in the island of Taiwan to travel to the Chinese mainland. (Photo: cnsphoto)

China's top railway operator said on Sunday that it has "taken seriously the building of a railway to the island of Taiwan," echoing Chinese netizens' calls as well as the Russian Ambassador to China's wish to visit the island by train.

China Railways, the country's top railway construction company, discussed the technical issues and routes of building the high-speed railway from East China's Fujian Province to the island of Taiwan in an article published in its official WeChat account on Sunday.

In the article, it mentioned China's National Comprehensive Transportation Network Plan, which was rolled out in late February and set the construction goals from 2021 to 2035 with a long-term plan extended. A route from Fuzhou to Taipei, in the island of Taiwan, was also listed in the plan.

Russian Ambassador to China Andrey Denisov also voiced confidence in China's capability to build a high-speed railway between the Chinese mainland and Taiwan, and stressed that both sides across the Taiwan Straits belong to China.

Denisov said he is looking forward to taking a high-speed train to visit the island some day in an interview with Hong Kong-based Phoenix TV in early March. "If I could have a chance to visit Taiwan Province, of course I prefer to do it by train."

Responding to such calls, the railway operator giant noted, "The dream that countless Chinese people have dreamt is finally drawing closer," as the Beijing-Taipei high-speed rail has only "the last part" between the Straits left to be completed.

It further went on to explain that with the completion of the Fuzhou-Pingtan railway last December, all of the construction work on the Beijing-Taipei high-speed rail has been completed except for the last section, which will link the mainland across the Straits, referring to "the last part" from Pingtan to Taipei.

The Fuzhou-Pingtan railway, the nearest one on the mainland from Taiwan, was put into operation on December 26. Pingtan is only 68 nautical miles away from Taiwan's Hsinchu, the closest point across the straits.

The Pingtan Strait Road-Rail Bridge, a key project of the Fuzhou-Pingtan railway, has a total length of 16.34 kilometers. It is the world's longest cross-sea road-rail bridge and the first road-rail bridge in China.