According to official data released by the National Forestry and Grassland Administration in March this year, China’s forest coverage rate has increased to 22.96% to 3.3 billion acres. A report from the United Nations showed that between 2010 and 2020, China, India and Australia were the three countries with the highest average annual net increase in forest area around the world.

As part of the plan to build a "Beautiful China", the country has vowed to increase its forest coverage to 26 percent by 2035. In 2019, NASA published a report saying that the world is literally a greener place than it was 20 years ago, and China is one of the main contributors to this change. Data from NASA satellites shows that China and India are leading the increase in greening on land. The effect stems mainly from ambitious tree planting programs in China and intensive agriculture in both countries.

According to the report, China’s outsized contribution to the global greening trend comes in large part (42%) from programs to conserve and expand forests. These were developed in an effort to reduce the effects of soil erosion, air pollution and climate change. 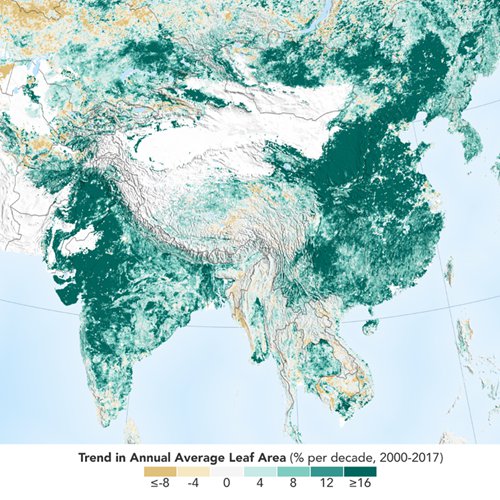 China’s policy of forestation is likely playing a significant role in curbing the impact of climate change as carbon dioxide absorption in two new forest areas in the country had been “underestimated”, BBC reported.

A study published in Nature journal shows that the role of two carbon sink areas, with one located in the country’s southwest China over Yunnan Province, Guizhou Province and Guangxi Zhuang Autonomous Region and the other in the northeastern provinces of Heilongjiang and Jilin, had previously under-appreciated.

Based on field trips and satellite observations, the international research team said the two reservoirs make up a little over 35 percent of the Chinese land carbon sink.

“Bold scientific statements must be supported by massive amounts of evidence and this is what we have done in this study,” Professor Paul Palmer from Edinburgh University, who co-authored the study, told the BBC. “We have collected a range of ground-based and satellite data-driven evidence to form a consistent and robust narrative about the Chinese carbon cycle,” Palmer added.

In recent years, global warming has been at the heart of climate issues, with excessive carbon emissions and global forest degradation as the main reasons. On the 75th United Nations General Assembly, China committed to peak CO2 emissions before 2030 and achieve carbon neutrality by 2060, showing firm resolution to protect the earth’s ecological environment.

To alleviate global warming, achieving carbon neutrality is the common goal of the world. China’s reforestation provides a leading role to improve carbon neutrality by reducing carbon emissions and increasing the absorption of atmospheric carbon dioxide.