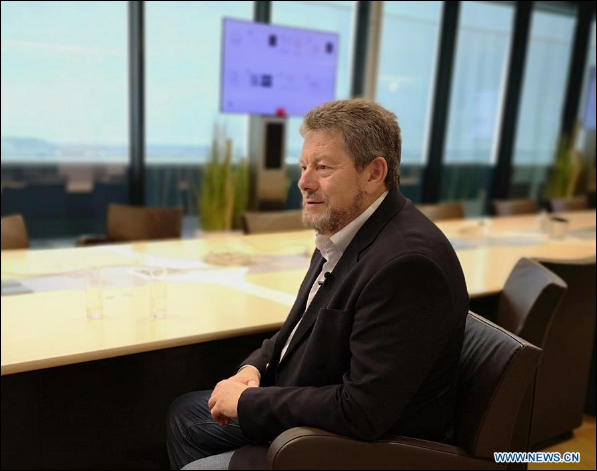 Laurence Barron, former CEO of Airbus China, speaks during an interview with Xinhua in Toulouse, France, May 17, 2018. Airbus embarked on its partnership journey with China more than three decades ago. In 1985, China bought its first Airbus aircraft; in 1994, the group established its first official presence in Beijing. Nowadays, more than 1,900 Airbus employees work in China, many of whom at the final assembly line in Tianjin, which had assembled and delivered 352 A320 aircraft by late 2017. (Photo: Xinhua)

China began its historic journey of reform and opening-up in 1978. In the past 40 years, the drive has lifted the country into the world's second largest economy.

Over the past 40 years, China's GDP has averaged an annual growth rate of around 9.5 percent in comparable prices.

The long-held policy not only brings China rapid and sustainable development, but also enables the country to have contributed greater momentum to global economy and created huge opportunities for multinationals.

Among them is Airbus, Europe's largest aircraft manufacturer.

Airbus embarked on its partnership journey with China more than three decades ago. In 1985, China bought its first Airbus aircraft; in 1994, the group established its first official presence in Beijing.

"I am particularly proud of this history," Airbus CEO Tom Enders told Xinhua in a recent interview.

Enders noted the partnership between China and Airbus had taken a leap forward over the past 10 years, with the group's first final assembly line outside of Europe beginning operation in Tianjin in 2008.

The group has remarkably expanded the number of its commercial aircraft sold to China. By late 2017, there were more than 1,500 Airbus commercial jetliners in service in China, and deliveries to the country represent nearly a quarter of Airbus' total jetliner production.

Also in 2017, Airbus announced the establishment of its second global innovation center, following the one in Silicon Valley, in Shenzhen, the pioneering city of China's reform and opening-up.

Nowadays, more than 1,900 Airbus employees work in China, many of whom at the final assembly line in Tianjin, which had assembled and delivered 352 A320 aircraft by late 2017.

As head of the Tianjin final assembly line project, Laurence Barron, former CEO of Airbus China, has a vivid memory of how vegetable fields turned into a factory in two and a half years and rapidly developed into a new industrial zone.

"Change is the word I would use to describe modern China. Subways, roads, a new airport open in Beijing next year...everything has changed at a very fast speed in Beijing and that's one of the reasons I like to live there, because it is a very dynamic city," Barron told Xinhua in an interview.

The first time Barron went to China was in the summer of 2003. He took office as the CEO of Airbus China one year later and has worked and lived in China ever since.

Barron recalled that from 1985, when Airbus delivered the first aircraft to China, to 1994, when Airbus set up its official bureau in Beijing, fewer than 20 Airbus aircraft had been delivered to China.

"The achievements made by Airbus in China is a good example of how foreign companies can take advantage of the reform and opening up and better position themselves in China," Barron said.

Having witnessed Chinese reform and opening up, Barron said many of the restrictions and obligations for foreign companies to set up businesses in China have been eased and relaxed, which will certainly encourage more foreign companies to go to the world's largest emerging economy with vast market potential,

"Opening up is a win-win for both foreign companies and China," Barron said.

At the 2018 annual conference of the Boao Forum for Asia in April, China announced several significant measures to enhance opening up, including cutting auto import taxes, and has promised to ease limitation on foreign equity in banking, security, and insurance industries.

Enders said that over the years of cooperation with China, Airbus has had an increasing number of partners and suppliers in the country. Meanwhile, the global leading aircraft manufacturer has also seen the Chinese aviation industry becoming more mature and competitive.

"We never underestimate the capabilities and strength of China's aviation industry. We believe that China can create competitive products. Competition is a good thing for the aviation industry," said Enders.

Today, beyond its role of important customer and supplier to Airbus, China has also become a strategic partner for the company. The cooperation spans various areas, from commercial aircraft to helicopters, defense, space, and innovation.

Recent reforms passed in China will help open lower-altitude airspace in the coming years, handing flight control from the military to civil aviation authorities. With only 900 or so civil helicopters in service in the whole country (as of late 2017), this will lead to tremendous possibilities for growth, making China the future world's largest rotorcraft market.

Xu Gang, CEO of Airbus China said Airbus' cooperation with China had been fruitful in the fields of market, capital, industry, and innovation and has made great progress in the past.

Xu said with China's further reform and opening up, the company will seek more cooperation opportunities and integrate more deeply into China.

"For any multinational company, China is a huge market, we should be more proactive in thinking, investing and exploring cooperation opportunities."

China is expected to overtake the United States as the world's largest aviation market by 2024. More opportunities will certainly emerge from the Chinese sky, Airbus aims to have 2,000 aircraft operating in China before the end of 2020 as demand continues to rise.