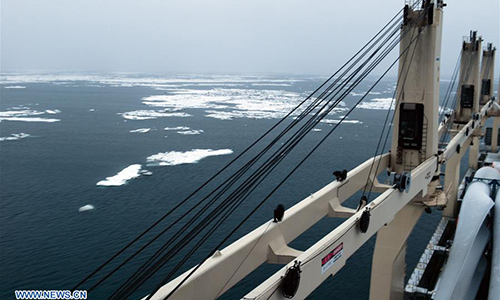 The Tian En vessel for China's COSCO Shipping Specialized Carriers during its journey through the "Polar Silk Road." A Chinese ice-class cargo ship crossed the Bering Strait on August 17, starting its maiden voyage in the Arctic's Northeast Passage. (Photo: Xinhua)

China has become a "rule maker" in the global governance of the Arctic, a blue paper said Thursday, calling on the country to "stay calm" and respond with action in the face of the hyped-up "China threat" theory. Jointly released by Beijing-based Social Sciences Academic Press and Qingdao-based Ocean University of China on Thursday, the blue paper said China's role in promoting global governance in the region cannot be ignored.In terms of global governance of the Arctic, China's role has shifted from a "rule follower" to a "rule maker," said the blue paper.China has led the governance philosophy and is taking the initiative in shaping the global governance agenda in the Arctic, it stressed. China is a "near-Arctic country" geographically. The natural conditions and changes in the Arctic have a direct impact on China' s climate system and ecological environment, which in turn affects China's economic interests in the fields of agriculture, forestry, fisheries and oceans, the blue paper said. Arctic countries also have concerns, of which China is aware, said the blue paper, stressing that maintaining regional security and promoting world peace has been the basic rule of China's diplomatic policies. The associate editor of the blue paper, Dong Yue, who is the deputy head of the Law School of Ocean University of China, told the Global Times on Thursday that the paper's call for China to "stay calm" means China won't take any "radical" action. The paper said that China holds the principle of respecting the sovereignty of Arctic states, not hurting their basic rights and guaranteeing the decision-making powers of the Arctic Council. China has been an observer member at the council since 2013. The "China threat theory" may mean other countries will unfairly raise the threshold for Chinese enterprises to become involved in the development of the Arctic, Zhang Xia, director of the Shanghai-based Polar Strategy Center at the Polar Research Institute of China, told the Global Times on Thursday.China's resource development in the Arctic region is conducted via trade and cooperation with Arctic countries, Zhang stressed. The security in the region is closely related with China's energy, ecological, military and scientific security, said the blue paper.The land territories in the Arctic cover an area of about 8 million square kilometers, whose sovereignty is held by Canada, Denmark, Finland, Iceland, Norway, Russia, Sweden and the US, the Xinhua News Agency reported in January. The Arctic Ocean has an area of more than 12 million square kilometers, in which coastal and other countries share maritime rights and interests according to international law, said the Xinhua report.