CHENGDU, May 30 (Xinhua) -- As more than 1,000 significant relics have been unearthed from new sacrificial pits at the legendary Sanxingdui Ruins site in southwest China, overseas research institutes, museums and international organizations have congratulated China on its new chapter of archaeological discoveries via video messages. 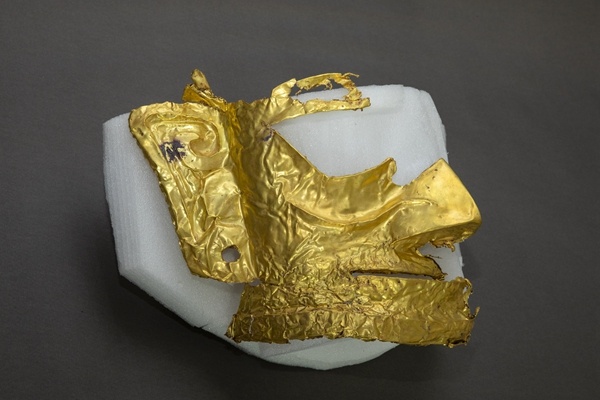 The incomplete gold mask artifact that archaeologists discovered in the No 5 pit at Sanxingdui Ruins in Guanghan, Sichuan province, on Jan 5. (Photo: China Daily)

The uncovered cultural relics are large in scale and magnificent in nature, a testament to the diversity and similarity of ancient global civilizations. The discoveries will also help promote cultural exchanges and cooperation between China and other countries, according to the officials and representatives.

Revered as one of the greatest archeological finds of the 20th century, the Sanxingdui Ruins entered a new era of excavation work starting from the second half of last year, which mainly involves its No. 3 to No. 8 sacrificial pits.

Notably, a unique bronze figure with a square altar-shaped bronzeware held up in its hands and an extremely rare bronze ware 115 cm in height were among the most head-turning discoveries.

The ruins located in southwest China's Sichuan Province, together with the Jinsha Ruins in the provincial capital of Chengdu, are applying for UNESCO World Cultural Heritage status, the provincial government said Friday.

Ernesto Ottone, assistant director general for culture at UNESCO, regards the new discoveries of the site as a milestone in archaeology and human beings' understanding of Chinese civilization.

"At a time when many excavations have been forced to a halt due to COVID-19, this discovery is particularly inspiring," Ottone said in a congratulatory video on the site's new progress.

Ottone also spoke highly of the site as it provides crucial opportunities for cultural exchanges, research and dialogue, which dovetails with the values proposed by the UNESCO mission.

Webber Ndoro, director-general of the International Centre for the Study of the Preservation and Restoration of Cultural Property (ICCROM), congratulated the Chinese archaeologists and China for their long-term dedication to excavating and preserving the ruins.

The ICCROM is also ready to collaborate with China to ensure the high-level conservation and dissemination of the archaeological discoveries from the Sanxingdui Ruins, said Ndoro via video.

Marcos Antonio Santos Ramirez, curator of the museum of the Chichen Itza site in Mexico, and Anna Vasiliki Karapanagiotou, director of the National Archaeological Museum of Greece, also sent their congratulations to China via video messages.

The unearthed relics show the special similarities between Chinese and Mayan cultures that transcend time and space, said Ramirez, adding that the similar features, including the symbolism of ceremonies, the use of jade and sacred trees, are worth further exploration and discussion.

Introducing Mycenaean civilization, which is contemporaneous with the Sanxingdui civilization, Karapanagiotou said there are plenty of similarities between Chinese and Greek civilizations, and she expects further cooperation between the two countries to better connect their peoples through cultural heritage and archaeology.

The Sanxingdui Ruins were discovered by a farmer when digging a ditch in the 1920s. Covering 12 square km, the ruins are in the city of Guanghan in Sichuan Province, about 60 km from Chengdu, the provincial capital, and are believed to be the remnants of the Shu Kingdom, dating back at least 4,800 years and lasting over 2,000 years.

Luo Qiang, vice governor of Sichuan, said the construction of the Sanxingdui National Heritage Park and a new museum is being accelerated to make Sanxingdui a world-famous tourist destination.