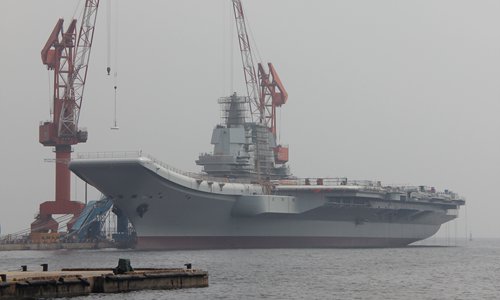 China's domestically built Type 001A aircraft carrier seems to be embarking on a fourth sea trial, judging by online videos, pictures and an announcement of a military exercise in relevant waters. The ship is expected to test its aviation system, helicopters and J-15 jet fighters.Experts expect the carrier will be delivered to the People's Liberation Army (PLA) Navy by April and take part in a possible naval parade to celebrate the 70th anniversary of the Navy's founding.Following a fireworks display, the aircraft carrier set out from the Dalian Shipyard in Northeast China's Liaoning Province with the assistance of multiple tug boats on Thursday morning, according to videos and photos posted on Sina Weibo on Thursday.A military exercise is scheduled from Friday to January 4 in Bohai Strait and North Huanghai Sea, according to a statement the Maritime Safety Administration of China released on Thursday. Other ships are prohibited from entering the designated area, according to the statement, which did not mention which ships might be involved in the exercise."During this sea trial, the carrier's aviation division will be coordinated for the first time," predicted Wang Yunfei, a naval expert and retired PLA Navy officer.The ship crew will run tests on the radar, communication, air traffic control systems as well as takeoff and landing equipment, Wang told the Global Times on Thursday.Wei Dongxu, a Beijing-based military analyst, told the Global Times that there will also be a comprehensive test of all of the carrier's systems including power, damage control, weapons, and navigation systems.Military observers have been expecting carrier-based aircraft to conduct takeoff and landing tests since the vessel's second sea trial in August. Wang predicts J-15 fighter jets and helicopters to fly over the carrier deck to test and coordinate systems related to takeoff and landing. "If everything works well, a takeoff and landing test is possible," Wang noted.Wei said that the J-15 pilots are already very familiar with takeoff and landing on the Liaoning, China's first aircraft carrier, so it will not be a difficult task to conduct tests on the new carrier.Full-sized models of aircraft will also be used to test loading and maintenance equipment, such as the elevator to transfer aircrafts between hangar and deck, Wei said.Chinese Ministry of National Defense spokesperson Wu Qian said at a monthly routine press conference on Thursday that the PLA Navy is planning celebration activities for the 70th anniversary of its founding.The PLA Navy may hold a maritime parade in April as a part of the celebration, according to media reports. Although it is still not certain, but the Type 001A might be delivered to the PLA Navy by then and could take part in the parade depending on the success of the sea trial, Wang said.Chinese military enthusiasts online hope to see the Type 001A join the Liaoning, which is currently undergoing maintenance, and the Type 055, China's 10,000-ton class guided missile destroyer that is also undergoing sea trials, at the parade.The Type 001A has conducted three sea trials in May, August and October respectively.