UNITED NATIONS, June 1 (Xinhua) -- Feeling somewhat exhausted after working long hours as the president of the United Nations Security Council during the full month of May, China's United Nations (UN) Ambassador Zhang Jun told reporters on the last day of China's presidency that the month had been fruitful. 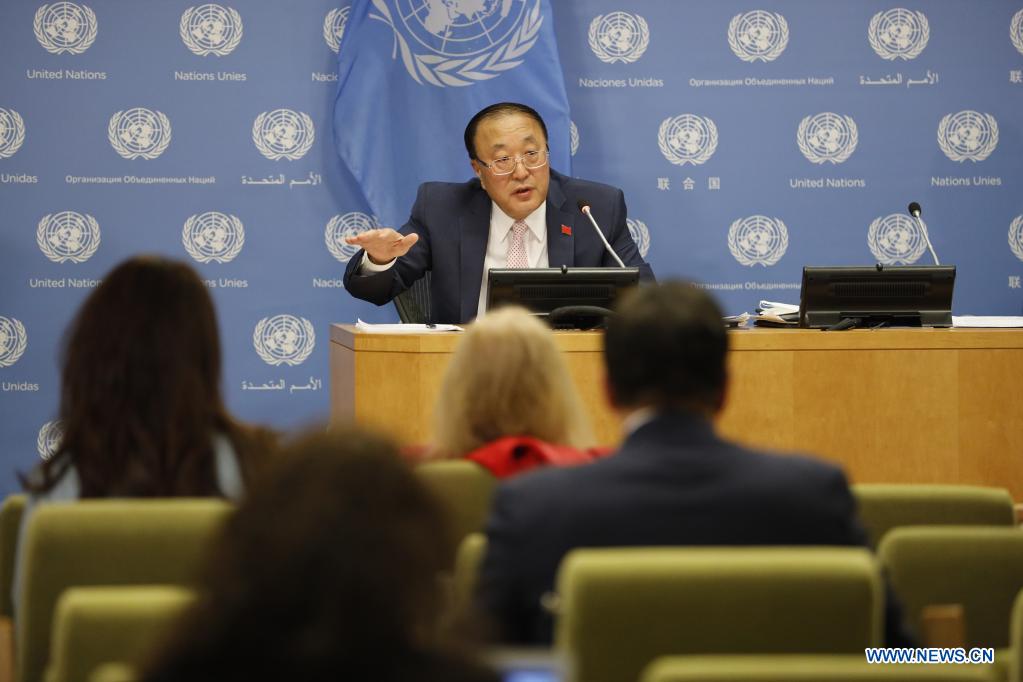 Chinese Ambassador to the United Nations (UN) Zhang Jun speaks during a press conference at the UN headquarters in New York, the United States, May 3, 2021. Zhang Jun, who took the rotating presidency of the Security Council, on Monday underlined the importance of practicing true multilateralism. (Photo: Xinhua)

The ambassador said the council had held 31 meetings during the month, three of which were at the high level of foreign ministers. The council also adopted the annual Security Council report and four resolutions, as well as two presidential statements, six presidential press statements, and two press elements.

"The council discussed issues on the agenda and responded quickly to the tensions in the Middle East in order to practice true multilateralism with real actions and push the Security Council to give play to the important role of maintaining international peace and security," the ambassador said.

Zhang expressed appreciation to "all friends for their support and help" through his Twitter account and reaffirmed China's determination to practice true multilateralism. "China will continue to fulfil its responsibilities," he said.

Safeguarding and practicing true multilateralism have been the "keynote" of China's presidency of the Security Council, which is a concrete manifestation of President Xi Jinping's important thought and concept of building a community with a shared future for mankind and China's foreign policy, Zhang told the press.

The world today is marked by changes and a pandemic unseen in a century, he said. "The international situation is complex and regional hotspot issues keep cropping up. The international community generally expects the Security Council to strengthen unity and cooperation and play a greater role."

"China has never been absent in supporting true multilateralism and the work of the United Nations, and will not be absent in the future," Zhang said.

Noting that this year marks the 100th anniversary of the founding of the Communist Party of China and the 50th anniversary of the restoration of the lawful seat of the People's Republic of China in the UN, Zhang said that "it is of great significance for China to assume the rotating presidency of the Security Council for May at such an important historical moment."

"China attaches great importance to the presidency," said the ambassador.

It was the second time that Zhang has presided over the council since he became the top Chinese UN official in 2019.

In March last year, when Zhang chaired the council for the first time, he persuaded council members to move online in a timely manner so that the only UN body with the authority to issue binding resolutions on member states could normally perform its duties when the globe was forced to enter a lockdown mode.

At the in-person wrap-up session of China's presidency of the Security Council on Friday, Ethiopia expressed its gratitude "for the unique place accorded to challenges facing Africa."

"We commended the China mission to the UN for a successful presidency at a time of complex challenges to global peace and security," Ethiopia's UN mission tweeted.

Pascale Baeriswyl, the Swiss permanent representative to the UN, also tweeted her congratulations to China's UN mission for a "successful" Security Council presidency during an "intense month."

The Swiss ambassador welcomed the timely adoption of the annual report to the UN General Assembly, and praised the "urgently needed focus on protection of civilians," and the "discussions on new technologies."