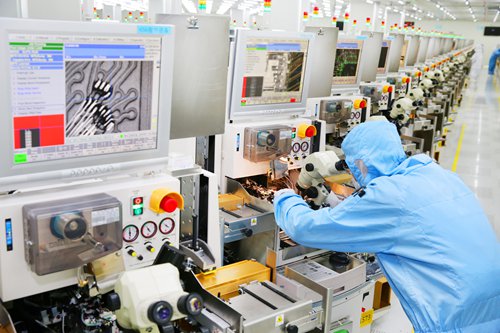 A worker checks the chip production line at a factory in Nantong, East China's Jiangsu Province on Monday. Photo: IC

Concerns over China's rising semiconductor industry have been growing among foreign competitors, especially South Korea, but the gap in technology is set to remain for the time being, industry representatives said on Wednesday.

Some major Chinese chipmakers are about to start mass production in 2018, which is likely to pose a threat to South Korean companies in the global semiconductor sector, the Chinese edition of Seoul-based newspaper Aju Business Daily reported on Tuesday.

Mass production will begin at three semiconductor factories in China, and the total monthly output is expected to reach 23 percent of the output of Samsung, according to the report. Supply from new Chinese factories is also likely to stem further price increases.

The booming market for semiconductor memory products is mainly led by NAND Flash and DRAM chips, which are widely used in smartphones.

Apple Inc was in talks with YMTC to buy NAND Flash chips, some media outlets reported during Spring Festival.

"If this move turns into a real deal, it will definitely reshape the semiconductor sector, as Chinese manufacturers may choose domestic chipmakers over foreign ones if their technologies are recognized by the US tech giant," he said.

Chinese smartphone manufacturers had a share of over 60 percent of the domestic market in 2017, market researcher International Data Corp said in an annual report released on February 6, 2018. Huawei, OPPO and Vivo were ranked as the top three companies in terms of shipment volume in China last year, the report showed.

While some industry representatives forecast that China's fledgling semiconductor industry will reach a milestone this year, others hold a more cautious view.

"While several factories are set to kick off mass production this year, it's unclear how well they can perform in terms of yield and quality," Liu Kun, vice general manager of the IC Industry Research Center at CCID Consulting, told the Global Times Wednesday.

Besides YMTC, which will begin mass production this year, two other chipmakers are expected to show whether their technologies can disrupt the dominance of foreign companies such as Samsung and SK Hynix, the analyst noted.

He referred to one based in Hefei, East China's Anhui Province - a joint venture between Chinese flash memory manufacturer GigaDevice and the Hefei government - and another one based in Quanzhou, East China's Fujian Province, set up by United Microelectronics Corp (UMC), a major chipmaker based in the island of Taiwan.

Chinese authorities have been urging accelerated development in semiconductor manufacturing in the past few years. In 2014, the Ministry of Industry and Information Technology (MIIT) set targets to narrow down the gap with foreign players in the semiconductor sector by 2020, as about 90 percent of the semiconductors used in China are imported from overseas, costing hundreds of billions of dollars every year.

"Some local governments have shown great enthusiasm for supporting the semiconductor industry, and there has been a slew of policy support for related investment," Liu said.

Still, companies such as Samsung, Intel and SK Hynix were ranked as the top semiconductor vendors worldwide in 2017, market consultancy IC Insights said in a report released in November 2017.

Although some targeted products such as NAND Flash and DRAM made by YMTC and other new fabs in China may compete with Samsung and SK Hynix, the technology gap still exists, Xu noted. "Catching up in production will need strong supply industries such as equipment, in which there is also a technology gap between China and South Korea," he said.

In addition, some cities in the Chinese mainland have been introducing talent from countries such as South Korea and from the island of Taiwan to tackle the technology hurdles.

"As far as I know, companies from Taiwan hold a practical attitude toward further cooperation in the semiconductor sector, as they are attracted by supportive policies as well as the vast market opportunities," Liu said.

Taiwan led all regions and countries in wafer capacity last year, with a 21.3 percent market share, IC Insight said in February 2017. Some local companies such as Taiwan Semiconductor Manufacturing Co and UMC have also set up wafer fabrication plants in the mainland in recent years in order to expand their presence to the market.