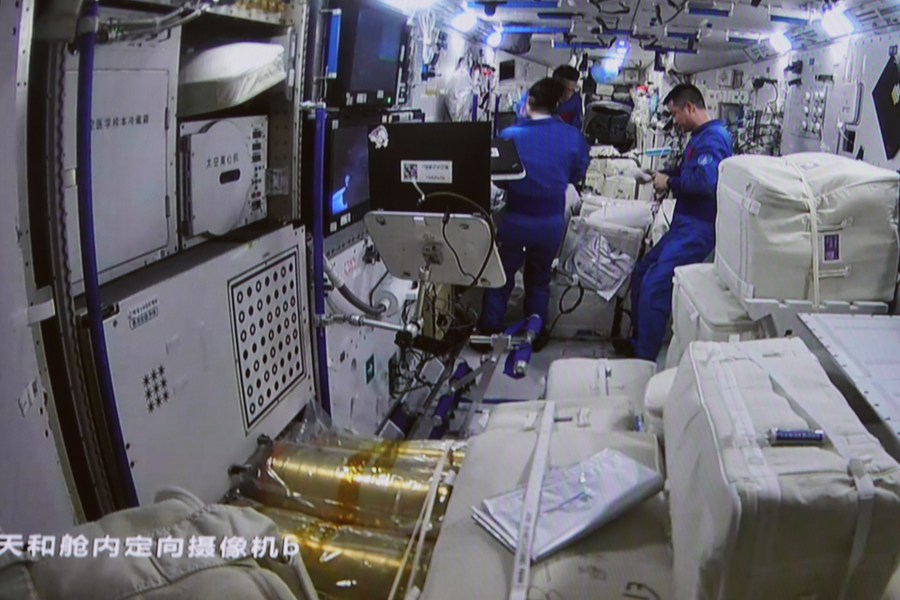 This screen image captured at Beijing Aerospace Control Center on Nov 12, 2022 shows the inside view of the core module Tianhe after China's cargo spacecraft Tianzhou-5 conducting a fast automated rendezvous and docking with the combination of the space station Tiangong. (Photo: Xinhua)

Three astronauts, Chen Dong, Liu Yang and Cai Xuzhe, have lived and worked in the space station complex for 183 days.

Prior to the separation, the astronauts had completed various work, such as completing the in-orbit rotation with the Shenzhou-15 crew, setting the status of the space station complex, sorting and downloading experiment data, and clearing and transferring supplies kept in orbit, with support from sci-tech staff on the ground, the CMSA said.

The Shenzhou-14 spaceship will reenter the Earth atmosphere at an appropriate time under ground control and start its journey home.

The three Shenzhou-14 astronauts were sent to the space station on June 5. They have completed multiple tasks over the past few months, including overseeing five rendezvous-and-dockings, performing three extravehicular activities, giving one live science lecture, and conducting a number of sci-tech experiments.