China saw its number of online audiovisual users expanding to 944 million as of December 2020, of whom 873 million were short video subscribers, according to a newly released report. 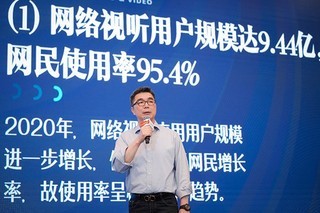 Photo shows a staff member introducing the latest report on the development of China's internet audio-and-video industry. (Photo courtesy of the sponsor)

The report released by China Netcasting Services Association, one of the biggest associations in the Chinese Internet industry, said the value of China's extensive online audio-and-video content market exceeded 600.91 billion yuan ($93.86 billion), a rise of 32.3 percent year on year.

China saw a total of 49.15 million new online users from June to December 2020. Among them, 25.2 percent came into contact with the Internet because of online audio-visual applications, while 20.4 percent were attracted by short video applications.

An increasing number of Chinese netizens used videos to record the moments of their lives. According to the report, 46.1 percent of users uploaded short videos in the past six months, a significant rise of 28.6 percent over 2019.

Also noteworthy is the fact that 28.2 percent of online video users preferred not to watch video programs at their original speed. In particular, nearly 40 percent of the post-00's generation chose to watch at twice the speed or more.

It has been shown that male users adopt the speed mode mainly to improve viewing efficiency, while females often use this function due to slow plots or in order to avoid certain content they do not enjoy.