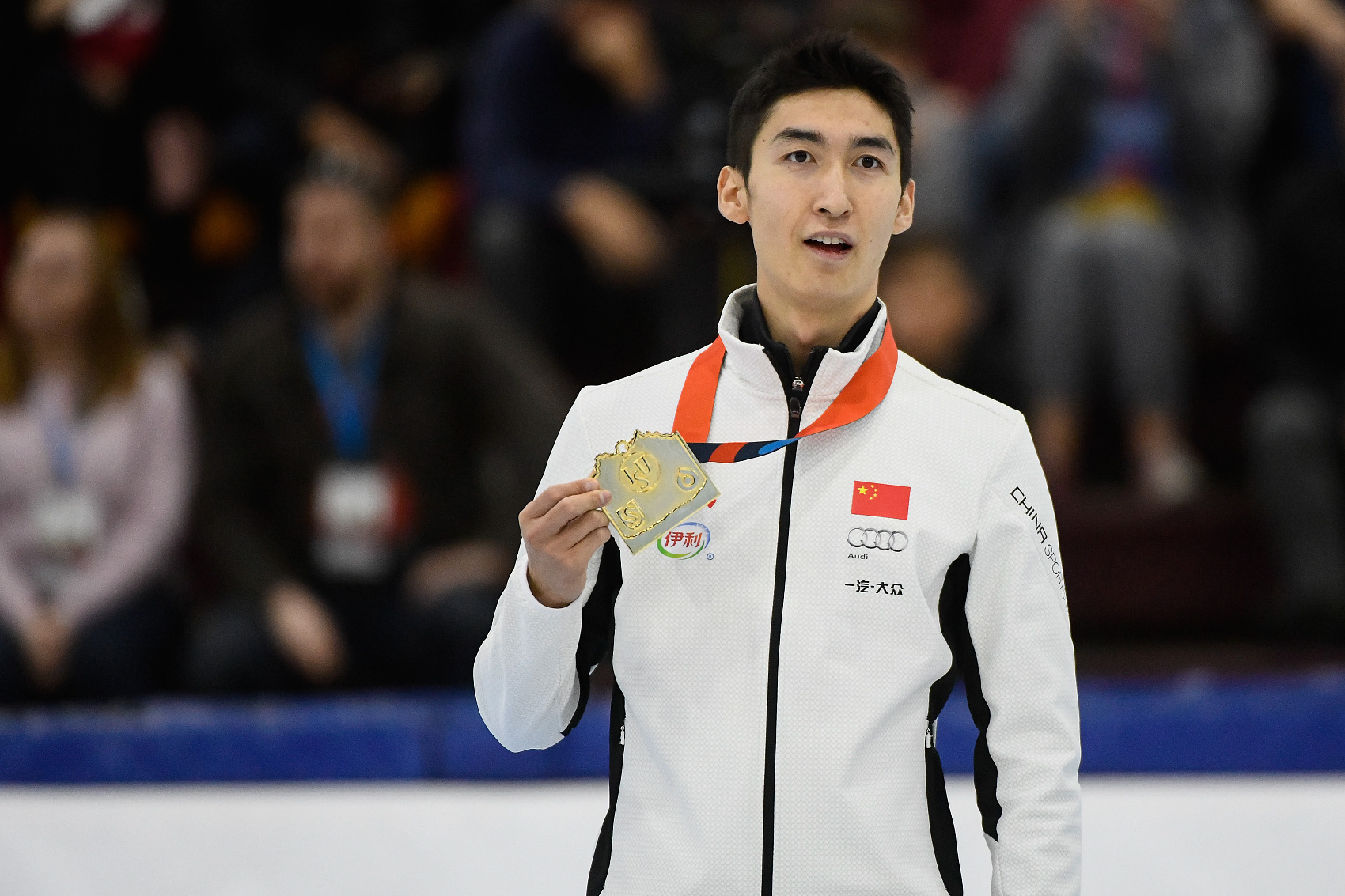 BEIJING, Jan. 1 (Xinhua) -- Wu Dajing, the men's 500m short track speed skating Olympic champion and world record holder, told Xinhua in a recent interview that the past year of 2018 has been "unforgettable" and his paramount objective in 2019 is to challenge his limits in longer distance competitions.

"The year of 2018 has been unforgettable for me. My Olympic dream has finally come true," said Wu, who won the Men's 500 meters at Pyeongchang 2018, breaking world records twice in one day to capture his first Olympic gold medal, also the first-ever gold medal for Chinese men's ice sports at the Olympics.

Although leading wire to wire in all three contests en route in the final on February 22 and being praised as "untouchable", Wu says the exciting triumph was by no means easy.

China, the next host of the Winter Olympics, faced an embarrassing 13-day gold drought after the opening ceremony at Pyeongchang. Wu, the most favorite Chinese skater to win the champion, was disqualified from the men's 1,000m semifinals because of a penalty.

"I was under tremendous pressure because of my failure in the ,men's 1,000 meters. I felt so good before (the penalty) that day," the 24-year-old youngster recalled. "Men's 500 meters was my last chance."

"I could find no way to release the stress. I just told myself, 'if I had to do something, I must be the best,'" Wu said.

The victory at Pyeongchang was not the end of Wu's glorious 2018. In November, he refreshed his own world record in 39.505 seconds at the ISU short track Word Cup in Salt Lake City.

"In terms of my fitness after the Olympics, the record was beyond my expectations, " Wu said, with a grin on his face. "I competed with all my strength and finished on the podium."

"My teammates asked me that why I tired so hard in restoration stage," the stubborn skater from Heilongjiang province said, "I want to tell everyone that my career is not a flash in the pan. I have new chapter to unfold."

From the chaser behind Victor An in Sochi 2014 to the "Speed King" of skating in 2018, Wu has greater responsibilities to shoulder in the new year.

Being unanimously voted as the new captain of Chinese short track speed skating national team in last September, he wants to spend more time considering the team as a whole.

"In the past, those senior teammates in the team has helped me in good ways. I have to pass the spirits to the new generation of the team," Wu said. "I am still far from being great. Lots of work needs to be done in every single training session."

The ever-growing influence of Wu, who now has nearly five million followers on the Chinese Twitter-like social platform Weibo, also reminds him to do more for Chinese winter sports.

"China announced a concrete measure to encourage 300 million people in China to participate in winter sports. That's the duty of mine as an ice skater. I would like to participate in social activities to popularize ice and snow sports in China," Wu added.

Moreover, Wu Dajing's vision is extended to a more distant future. "Everything we are going to do in the year of 2019 is for 2022 Beijing Olympics, in three years the results will be even greater (than the results of 2018). My next dream is to win golds at home," he said.

"I want to make breakthroughs not only in 500 meters, but also in 1,000 meters, 1,500 meters, 5,000 meters relay and 2,000 meters mixed relay. I expect to challenge my limits in longer distance competitions, in every event I participate. That's my paramount goal in the new year," Wu said.