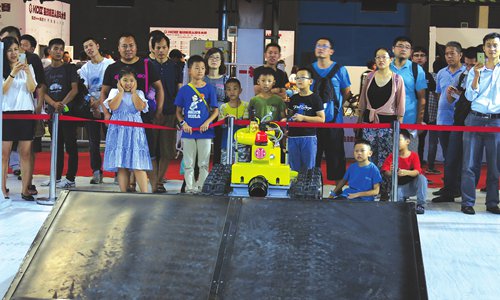 Children and their parents watch a firefighting robot at the 2018 World Robot Conference in Beijing, on August 16, 2018. (Photo: Global Times)

In some cities, robots are already roving big shopping malls and residential quarters to detect suspects or potential danger.

For example, in the city of Gu'an, Hebei Province, a "robotic security guard" is identifying and marking improperly parked cars. It can also detect burning smells or smoke and alert fire officials. This robot was developed by the Beijing Aerospace Automatic Control Institute of China's Academy of Launch Vehicle Technology.

Since 2013, China has been the largest market for robots worldwide, with steady dynamic growth, according to the International Federation of Robotics (IFR).

China sold 30 percent of the robots in the world in 2016, making it the biggest robot seller in the world, with a sales volume close to that of Europe and the US combined.

According to a national robotics industry development report released by the Chinese Institute of Electronics, the size of China's robot market in 2018 is expected to reach $8.74 billion, and specialized robots are predicted to account for $670 million.

When an earthquake and tsunami hammered northeastern Japan and damaged one of its largest nuclear power plants in 2011, the job of finding the missing fuel had to go to a robot, since the task would have been deadly for a human.

"It's very difficult to design a robot to operate in an unknown environment," Hajime Asama, a professor at the University of Tokyo, told Wired. "Until we send the bot in, we don't know what the conditions are. And after it's sent, we can't change it."

That is one of the features of specialized robots - working in unknown and extreme situations.

At the recent World Robot Conference held in Beijing, a variety of specialized robots were displayed at major domestic exhibition booths and attracted the most attention from visitors.

According to sales manager Wang Liming, their robots can be used in environments with nuclear, biological or chemical contamination.

"For example, if any nuclear complex leaks radiation, we can send the robot to enter the plant and collect samples," he told the Global Times at the robot conference. Moreover, he added the robot can perform some easy tasks, such as turning on or off a valve.

The one-meter high, black-and-white machine is equipped on all sides with cameras and has six gas sensors. Its battery lasts for a maximum of eight continual working hours. The robot's metal exterior shields it from a high level of nuclear radiation, allowing all the inner electronic parts and components t0 run smoothly, said Wang.

He noted that every part of the robots his company sells is developed by the company itself, using its own patented technology.

The robots can also be used in firefighting and in the petrochemical industry. They are sold to the Middle East and Southeast Asia, with nearly 30 exported annually, said Wang.

The mass use of petroleum in power plants in Saudi Arabia makes Kaicheng's robots welcomed and useful in the region, since firefighting trucks cannot enter the local narrow streets, but the robots can.

Collaborating with Finland, Germany and Russia, the institute's Ground Unmanned Platforms Research and Development Center has modified a Russian robot used for nuclear disposal at the Chernobyl Nuclear Power Plant, developing it for use in disaster rescue.

Employee Tao Jin at the center told the Global Times that the robot is designed to work in indoor areas, including areas that have collapsed, for example after an earthquake. The robot has various attachments that can be used in special situations. For example, an arm can be attached that will break down a door. Other attachments can be added for monitoring, striking an opponent, or rescue.

"Not only defense industry enterprises like our company are making specialized robots, but also private enterprises… The level of such robots produced in our country is not inferior to the US. We have different specializations," Tao said.

A "robotic security guard" developed by Beijing Aerospace Automatic Control Institute attracted great attention at the World Robot Conference. It moved around freely like a human guard, with greater competence.

For instance, it can lead the way if anyone gets lost; it can recognize a wanted suspect or thief, even at night; and it can detect a suspicious smoke or heat source immediately. More importantly, the "head" of the robot can transform into an unmanned aerial vehicle, monitoring and tracking targets.

Liu Xiujuan is the project leader for robots of this type. She said the major work of the institute is to research target detection and recognition, as well as navigation control.

These technologies, already developed for rocket control, can be transferred with precision for use in "robotic security guards."

In 2015, the government called for military-civilian integration in the science and technology sector. In response, the Beijing Aerospace Automatic Control Institute is using its technological edge to develop robots for civilian use.

Autonomous navigation enables the robot to walk as freely as human beings. The robot has "eyes," which combined with big data analysis can recognize exceptional situations.

Liu said the robot has already been put into use in a residential quarter called Meiyuanli in southern Beijing this April.

Specialized robots in security monitoring are widely used in shopping malls and unmanned factories around the country.

Are Chinese concerned that robots will replace human beings one day?

The answer is no. Although World Bank President Jim Yong Kim said in 2016 that 77 percent of all jobs in China could be at risk because of automation, almost two-thirds of Chinese respondents are confident that robotics and artificial intelligence will create jobs, according to survey carried out by media group Dentsu Aegis Network.

A police officer who was working at the conference told the Global Times that in spite of witnessing the great advances in robotic development, he is not worried that one day these machines will replace him because "robots do not know how to react to complex situations."

Song Aiguo, dean of the department of instrument and meter engineering at Southeast University, echoed that the current working model is man-robot collaboration. For example, five security guard robots can work in a shopping mall while one man is still needed to sit in the monitor room, which can highly improve working efficiency and economize on manpower.

But he also noted that the cost of security guard robots, at tens of thousands of dollars per unit, is not cheap at present, so only big companies and departments can afford them.

Talking about the future of the specialized robot market, Song is optimistic. He said China's specialized robots are used in a wider range of applications than other countries, giving the country an edge.

A guide to specialized robots

What are specialized robots?

Specialized robots refer to those that can take the place of human beings to work in high-risk environments or specialized working conditions. They are mainly for military applications, extreme environments or emergency rescue.

What can it do well?

It can work well under high-risk conditions, replacing human beings to perform dangerous tasks, in order to avoid loss of life and personal injury.

What can't it do well?

The level of intelligence and computing power are not as high as human beings. Its ability to deal with complex tasks is inferior to humans.