China's 'Spidermen': Litter-picking over the abyss

Dangling 400 metres (1,300 feet) over a void, suspended only by a cord, Yang Feiyue is not your average litter-picker. 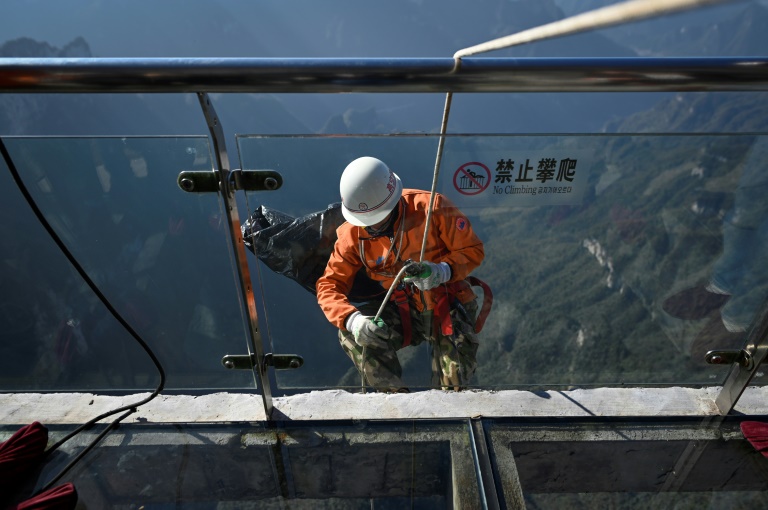 ‘The Spidermen' are a team of abseiling litter-pickers who work along the sides of Tianmen mountain in central China. (Photo: AFP)

The 48-year-old's job is to abseil down cliffs on central China's Tianmen mountain -- an area famed for its natural beauty but plagued by plastic and other waste.

Local media call Yang and his team "the Spidermen", after the skyscraper-scaling superhero, and it's easy to see why.

Yang descends and hangs off the steep cliff face, patiently picking up rubbish thrown off the side by tourists.

His colleagues at the top hold firmly onto his rope, attached to hooks in the rock. When he is finished, he is hauled up via a system of pullies.

"When it rains, we get single-use ponchos -- and since the pandemic, we get face masks as well," he explains.

Yang's team was created in 2010 by the Tianmen mountain management to deal with waste accumulating on its sides, an unfortunately common occurrence at Chinese beauty spots.

Numerous stands selling food and drinks at tourist attractions are a major source of packaging that sometimes ends up being thrown on the ground -- or off a cliff.

Campaigns in schools and the media have boosted people's environmental consciousness, along with an increase in recycling bins in public spaces.

"In the last 10 years, we've seen less and less littering," says Ding Yunjuan, vice-director of marketing for the mountain.

"Before, our 'Spidermen' collected five tonnes of litter a year. Tourists nowadays are more civilised."

Even so, Yang and his colleagues collected two tonnes in 2020 -- despite the fact that the coronavirus pandemic significantly reduced visitor numbers.

Unsurprisingly, the job is physically demanding.

"At first, my hands were incredibly painful after a day's work -- I could barely use my chopsticks to eat. But it's a lot better now!" laughs Yang.

He says he will keep abseiling down the mountainside as long as it is necessary.

While Yang admits that he enjoys the nickname 'Spiderman', his real motive is the preservation of the mountain.

"We're acting for the beauty of the site," he said. "So I don't mind working away at it!"