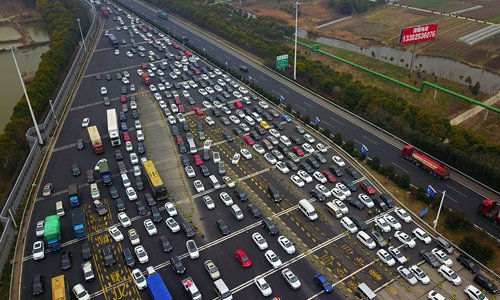 The Spring Festival travel rush has started to recede as 5.5 million railway trips were expected to be made on the last day of the Year of Rooster, a decline of more than 37 percent from the previous day. Railway passenger traffic on Wednesday was 8.825 million, up 4.8 percent or 403,000 from a year earlier, according to the statistics released Thursday by the China Railway Corporation. The lunar Year of Dog falls on Feb. 16. As people tend to get together with their families in the week-long holiday ending Feb. 21, transportation departments may have some temporary relief in the following days. But soon another peak will arise with people leaving their home towns to work, and students going back to school. The Spring Festival travel, also known as Chunyun, lasts for 40 days this year, From Feb. 1 to March 12. A separate report from the Ministry of Transport pointed to a slight drop in the number of trips made during the first 10 days of the travel season. One of the reasons is that most college and university students were already home for the winter vacation as the festival comes late this year. In addition, some migrant workers had been allowed to leave before the travel rush started, while more people opted to drive home. Chinese people made 732 million trips via railway, road, waterway, and plane from Feb. 1 to Feb. 10, down 3.3 percent year on year, according to the report.