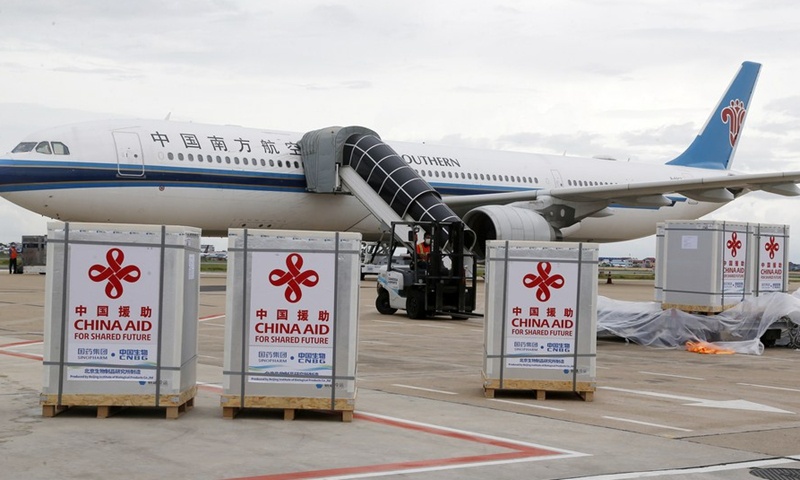 Over 2,600 Chinese nationals were inoculated with Sinopharm's COVID-19 vaccines as of Thursday in the Vietnamese capital Hanoi and northern Bac Giang province, which has a large number of Chinese nationals working at industrial parks, the Xinhua News Agency reported.

Chinese nationals in 25 other localities across Vietnam including southern Ho Chi Minh City, the current epidemic hotspot in the country, would also be inoculated, the report said.

In Myanmar, nearly 7,000 Chinese nationals had received two shots of Chinese vaccines under the "Spring Sprout" vaccination program as of July 11, according to the Chinese Embassy in the country.

Those who were inoculated said that the program brings safety and care to Chinese workers overseas and encourages them to contribute more at their postings.

An executive surnamed Wang from a Chinese company based in Vietnam told the Global Times that China's "Spring Sprout" vaccination program has been a tremendous help to Chinese industrial parks in the country amid the outbreak.

The epidemic in Vietnam has worsened recently. This week, Wang said that for the first time since April, he has had to come to the office with a home-prepared lunch box as restaurants remain closed amid a shelter-in-place order from the government.

The program is long-awaited for those who have been at overseas postings for the past year and a half, and it is warmly received, Wang said. "Under the program, we all get the shots. Chinese managers staying at overseas postings have gained at least some level of psychological comfort," he said.

However, risks still loom for local employees in the industrial parks, as many are yet to be covered due to a lack of sufficient vaccines, Wang said.

Qian Feng, director of the research department at the National Strategy Institute at Tsinghua University, told the Global Times on Monday that it's a good idea to inoculate local employees working at Chinese industrial parks overseas to ensure their normal operations, but there are difficulties in reality.

"China-developed vaccines also aim to help the world in the fight against the pandemic, but the problems are whether vaccine production can meet the massive demand in many developing countries, and whether foreign nationals are willing to receive Chinese vaccines, given that there are some other choices like the Pfizer-BioNTech vaccine," he said.

China has always accommodated domestic and foreign needs for COVID-19 vaccines, and it opposes vaccine nationalism.

As of July 9, China had provided more than 100 countries and international organizations with 500 million doses of COVID-19 vaccines and concentrates, accounting for one-sixth of the current global COVID-19 vaccine production, said a separate Xinhua report.