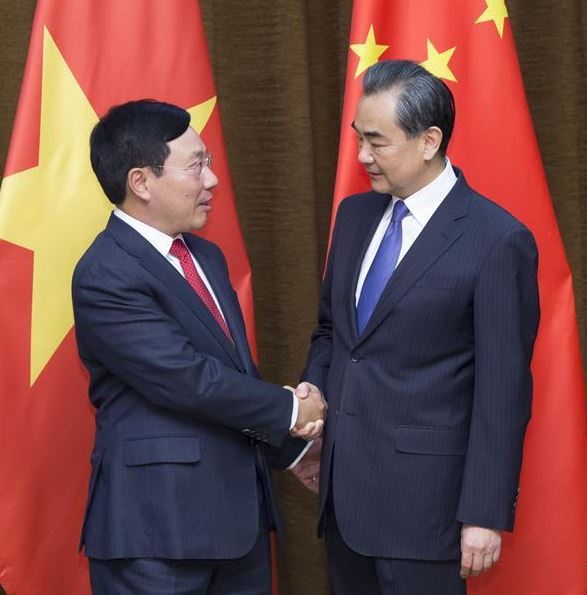 Nhan, who is also Member of the Political Bureau of the Central Committee of the Communist Party of Vietnam, welcomes Wang's visit to Ho Chi Minh City chairing the 11th meeting of the China-Vietnam Steering Committee for Bilateral Cooperation in Vietnam, saying that the committee plays a vital role in planning and developing Vietnam-China relations.

Nhan said that China's success not only benefits the Chinese people, but also brings opportunities for the development of Vietnam.

He said that as Vietnam and China are both neighbors and comrades, "we should cherish and inherit the friendship forged by the older generation of leaders of our two countries, to facilitate positive outcome of the Vietnam-China comprehensive strategic partnership of cooperation and to benefit people of both countries."

Nhan said that Ho Chi Minh City, with an important position in Vietnam's economy, is dedicated to build itself into a smart city, hoping to cooperate closely with related provinces and cities of China in this regard.

For his part, Wang said China and Vietnam are good brothers, good partners and good comrades, and the two countries have forged the deep friendship from living in harmony with each other for a long time.

China and Vietnam are two important socialist countries in the world, and the two parties and two countries have established mutual trust, mutual support and mutual cooperation which have not only promoted development and revitalization for each other, but also resulted in positive and deep influence to the development and progress of the mankind, Wang said.

The importance of China-Vietnam relations have gone far beyond the bilateral scope and they are of strategic importance, Wang noted.

Sub-national cooperation is an important component of the China-Vietnam relations, Wang said, noting that China-Vietnam friendship is a shared cause of all the people of the two countries.

The Chinese delegation includes leaders from Guangdong, Guangxi, Yunnan and Chongqing, which shows that the China-Vietnam ties are growing more and more profoundly with ever expanding cooperation.

The Chinese side stands ready to strengthen communication and cooperation with Ho Chi Minh City and make positive contributions to the enrichment of China-Vietnam comprehensive strategic cooperative partnership.

At the invitation of Vietnamese Deputy Prime Minister and Minister of Foreign Affairs Pham Binh Minh, Wang is in Vietnam to chair the 11th meeting of the China-Vietnam Steering Committee for Bilateral Cooperation.