China's success at attracting skilled researchers draws ire of US

The US has used similar methods to attract talent for decades, but feels threatened now that China is doing the same thing

It's the 10th year since one of China's most important talent recruitment plans, the Thousand Talents Plan, was put into action. 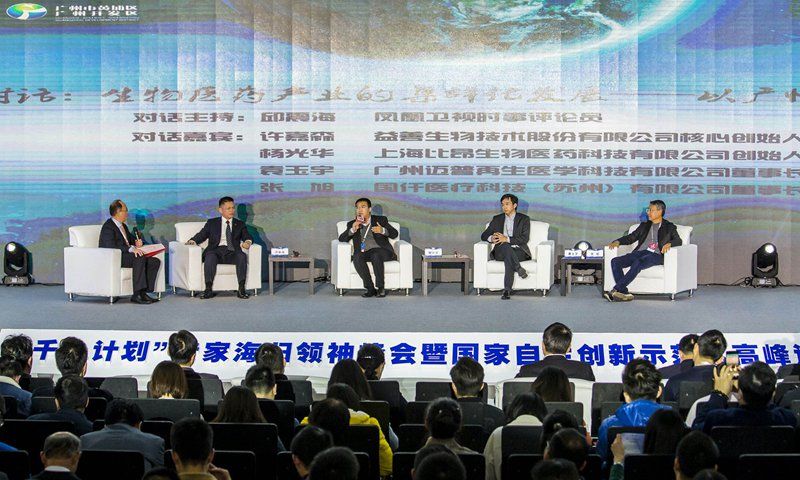 Over the past decade, the plan has successfully brought in thousands of high-level skilled workers from abroad to China. It has been hugely successful in pushing China's development, but it's now under attack from the US, which is accusing China of utilizing the plan to seize US "military and commercial technology."

A report from Bloomberg recently cited US intelligence officials as saying the Thousand Talents Plan aims to "transfer, replicate and eventually overtake US military and commercial technology." A Times of London report said that US intelligence institutions are concerned that China's talent attraction plan could lead to the outflow of US intellectual property to China.

Zhang Guixin, a professor from Tsinghua University and an expert on the Thousand Talents Plan, told the Global Times that the US has gathered talented people from all over the world, including Chinese scientists. "The US is the biggest beneficiary of talent flow. Now seeing China is doing the same thing, the US feels threatened. Its accusation against China is totally groundless and represents protectionism. The argument doesn't stand up," he said.

Initiated in 2008, the Thousand Talents Plan has so far attracted about 6,000 leading Chinese scientists, entrepreneurs and academics living abroad back to China. It also brings in many foreign-born researchers to China, according to the official website of the plan.

Participants in the plan are eligible to enjoy a series of preferential policies, including permanent residence, social insurance, and a 1 million yuan ($150,000) allowance.

People approved by the Thousand Talents Plan need to have obtained a PhD degree overseas and shouldn't be more than 55 years old, while for foreign experts, the age limit is 65 years old. They need to work at least 6 months of every year in China.

Li Xiaoguang, vice president of China's e-commerce giant JD.com and an expert in unmanned aerial vehicles (UAV), said that an important incentive that drove him to decide to return to China is that JD.com wants to use UAV to cut its logistics costs to the lowest in the world.

"I want to be the number one in the world," Li said. He added that what he truly cares about is using technology and products to serve society and mankind.

In 2010, the central government unveiled the Recruitment Program for Young Professionals, a version of the Thousand Talents Plan targeting people earlier in their careers.

According to experts, so far the Thousand Talents Plan has yielded fruitful academic achievements in a range of fields including satellites and anti-AIDS drugs. Li said that participants in the plan have set up nearly 100 listed companies whose total value has reached 800 billion yuan, and is expected to exceed 1 trillion yuan this year. These are high-tech companies which push forward China's plans to upgrade its industrial capacity.

At a recent gathering of Thousand Talents Plan participants, many said that China is on a fast developmental track and it's academic atmosphere and startup projects meet international standards. This makes them want to come back to their motherland to make a contribution. They say the feeling of returning home is different than working overseas.

Chen Ning, who works under the talent plan and is the CEO of a company in Shenzhen, South China's Guangdong Province, told the Global Times that participants have brought in advanced ideas, marketing operations and creativity to China, inspiring the country and local governments to set up a robust innovation mechanism and environment.

"Because Chinese people are paying more attention to intellectual property, China has experienced tremendous achievements in original technology," Chen said. He added that at the current stage, "We still need to step up enforcement of intellectual property protection laws to make more breakthroughs."

The achievements of the Thousand Talents Plan have incurred suspicion and criticism from the West, especially the US. It's now not rare to see accusations in the US media that the talent plan aims to steal foreign technology.

Song Guoyou, director of the Center for Economic Diplomacy of Fudan University, told the Global Times that the US is overreacting, and the talent plan is simply a program for academic exchange.

"The US aims to seize global talent and prevent talent from making decisions freely, which shows US self-confidence is decreasing," said Song.

"Academic communication is mutual as it not only benefits China but also the US. Information about China's technology and development is also shared among US academics," he added.

Zhang Guixin noted that the US benefits from its own talent introduction plans.

Chen said China can learn from this. Any country and region that is open to attracting global talent can boost its domestic technology development.

An anonymous expert told the Global Times that US attention to the Thousand Talents Plan reflects the contest between the two countries. Talent competition doesn't simply involve economic interests but is also linked to the country's interests. Any potential risks to US interests will be opposed by the US. The US government and FBI have reached agreement on this.

According to this expert, even though Chinese researchers in the US don't infringe on the US law and regulations, the FBI will still occasionally "invite" them to "have a coffee," during which time they let the researchers know they are under surveillance and warn them not to break the law. The expert stressed that to abide by local laws and regulations is the best way for students to protect themselves.

Li Haidong, a professor at the China Foreign Affairs University's Institute of International Relations in Beijing, told the Global Times that US suspicion and accusations toward China have long existed, but these fears are totally unnecessary.

China wants to learn from the US but the US also keeps a wary eye on China's industrial development and academics' views, according to Li.