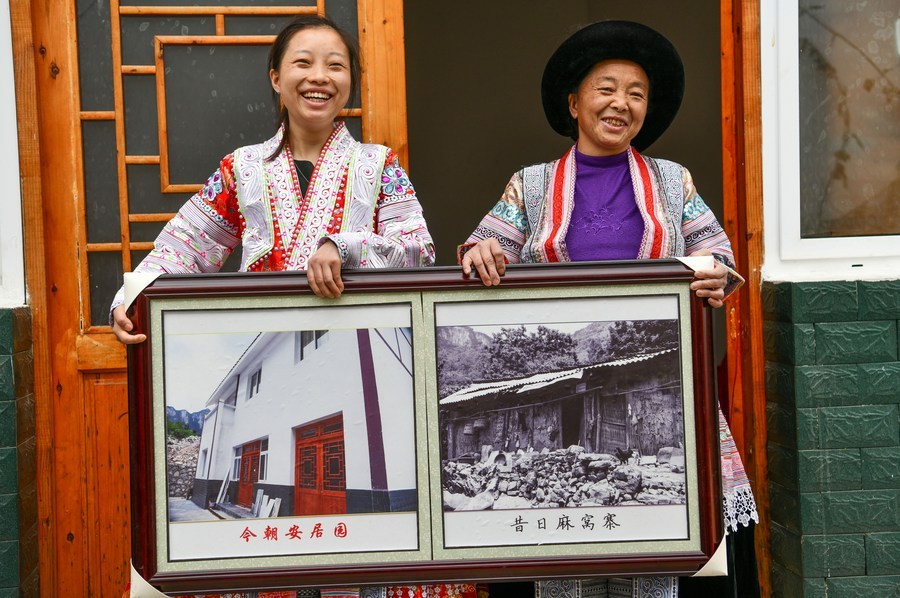 Wang Daiyu (L) of Miao ethnic group and her mother Yang Wenmei show photos of their houses before and after the relocation at the relocation site for poverty-stricken people in Huawu Village, Qianxi County of Bijie City, southwest China's Guizhou Province, Feb. 20, 2021. (Xinhua/Yang Wenbin)

"This is a very valuable lesson for us all -- the elimination of poverty is not something that can be achieved in one quick action, or with one policy change. It needs a constant and strong commitment, and a consistent approach," Harris told Xinhua in a recent interview via email, calling China's victory against penury "unique and inspiring."

Noting that China's success in the fight against poverty was multifaceted -- not merely due to economic growth, Harris said that two aspects are particularly important, namely, rural development and digital transformation.

"The first is that China's success in eliminating extreme poverty is at least partly a success of rural development, for that is where the majority of the remaining poverty was, and that is where many of those who first benefitted from poverty reduction were," said the economist.

Referring to the second element, Harris pointed to "the role that digital technologies, and more generally, digital transformation, has played in generating wealth and helping to raise up the poor."

"China's embrace of digital technology is also important for its future growth," he said, adding that COVID-19 "has demonstrated beyond doubt that the future of our economies and even our societies will be driven" by digitalization.

Noting that China has long focused on reducing poverty, Harris said that the country's success was the result of "the impressive achievements in poverty reduction in the second half of the MDG (Millennium Development Goals) era."

"That effort in China began well before the MDGs and has continued after the MDGs and into the SDG (Sustainable Development Goals) era; the clear focus on eradicating poverty has never faltered," Harris noted.

Speaking about the relations between development and poverty, Harris said that "progress in development is often tenuous. One often hears of shocks causing people to slide back into poverty. But that seems not to have been the case in China."

"Resilience to shocks seems to have been one of the hallmarks of the anti-poverty effort. That will also be a part of the valuable lessons that China's experience offers to other countries -- how to build resilience into development, so that the gains achieved can be more steadily preserved," Harris said.

"There are many characteristics of the Chinese society and economy that set it apart from other developing countries," he said.

"The most evident of these, of course, is the sheer size of the population, and the massive scale of the domestic market," he said, adding this offers China an option of "transition to growth driven by the domestic market, shifting away from the dependence on trade and investment."

Meanwhile, "China has taken advantage of its exposure to global markets and beneficial trade relations, and using these to drive productivity gains. This is an example that other countries can seek to emulate," said the UN chief economist.

Regarding the global economy's post-pandemic recovery, Harris stressed that "we will all look to China for its leadership in building the sense of unity and solidarity that we need for a successful recovery from COVID-19, and we will follow the Chinese example in eradicating extreme poverty by 2030, as we promised five years ago."