China's top economic planner announced on Thursday that it is suspending indefinitely all activities under the China-Australia Strategic Economic Dialogue, marking the first time that a diplomatic mechanism between the two countries was frozen on the heels of downward spiraling bilateral relations.

The decision represents a substantial and resolute response from China to a major shot fired by the Australian government in scrapping the Belt and Road Initiative deal signed with China. It also sends a clear signal that China is resolute, and prepared to take all necessary moves to defend its national interests in response to Australia's provocations, and that more measures would follow if Canberra further escalates its anti-China agenda, observers said.

The suspension is a strong political gesture and indicates that more bilateral government-to-government communication avenues would likely to be put on hold, trade deals would shrink drastically and bilateral relations would sink from "deadlock" to "implosion" if Canberra does not exhibit good faith measures to repair bilateral relations, analysts said.

The National Development and Reform Commission (NDRC) announced on Thursday that it will indefinitely suspend all activities under China-Australia strategic economic dialogue, which is jointly held by NDRC and the relevant ministries of the Australian Commonwealth Government.

NDRC said that the decision was based on the current attitude of the Australian Commonwealth Government toward China-Australia cooperation, as some Australian Commonwealth Government officials recently "launched a series of measures to disrupt the normal exchanges and cooperation between China and Australia out of Cold War mindset and ideological discrimination," according to a statement on the website of NDRC.

According to media reports, the last round of dialogue, or the third round under the framework, was held in Beijing in September 2017.

The two sides had signed a memorandum of understanding on third-party market cooperation by then.

The first round of the dialogue took place in Beijing in 2014, while the second round of dialogue was held in Canberra in 2015.

The suspension marks the first time that Beijing has officially frozen a diplomatic channel with Canberra, after the Australian federal government, in what viewed as a provocative action against China, uses so-called laws to revoke in April agreements signed between Victoria state and China on the Belt and Road Initiative (BRI).

Chen Hong, a professor and director of the Australian Studies Center at the East China Normal University, told the Global Times on Thursday that the suspension is the first major announcement made by the Chinese central government authorities on the first working day after the five-day May Day holidays, signaling a substantial and resolute response from Beijing toward the Australian federal government's aggression in tearing up the BRI deal.

"Such a suspension is very rare within China's diplomatic course with major countries, which underscores China's strong objection to the move and sends a clear warning to Australia that China is determined, and is ready to employ all necessary tools to defend its legitimate interests," Zhou Fangyin, Dean of school of international relations at Guangdong University of Foreign Studies, told the Global Times on Thursday.
"Australian Prime Minister Scott Morrison should understand China's bottom line and drop the fantasy that China may retreat on Australia's unreasonable provocations," Zhou said.

James Laurenceson, Director and Professor at the Australia-China Relations Institute under the University of Technology Sydney, told the Global Times that China's response is "calibrated," not a dramatic over or under-reaction.

"China's suspension of economic dialogue with Australia is a necessary and legitimate response toward Australia's restrictions on bilateral cooperation projects, and the country should bear full responsibility for such moves," Wang Wenbin, China's Foreign Ministry spokesperson, said at a press briefing on Thursday.
In April, China's Foreign Ministry requested Australia revoke its wrong decision over the BRI deal, and the ministry also warned that it will hit back hard.

Chinese observers stressed that to date, it is meaningless for China to honor communication mechanisms given Australia's anti-China stance.

"First of all, Australia does not display the right attitude for a dialogue to plow on. And Australia's unilateral tore-up of BRI deal also shows that any agreement formally signed between China and Australia could be scrapped by any unjustified excuse at any time," Zhou noted.

Australian Trade Minister Dan Tehan said on Thursday that the country is disappointed with China's decision, and "remains open to holding the dialogue and engaging at the ministerial level."

Australia's previous sabotage on bilateral relations mostly remained at the level of a flurry of threatening rhetoric, but it now has taken a series of concrete actions, firing shots in trade and investment areas - deemed as a cornerstone for bilateral relations - to inflict substantial harm on China-Australia relations.
In addition to scrapping the BRI deal, Australia's Department of Defence is also reviewing the 99-year lease of Darwin port, a commercial and military port, to the Chinese firm Landbridge Group. 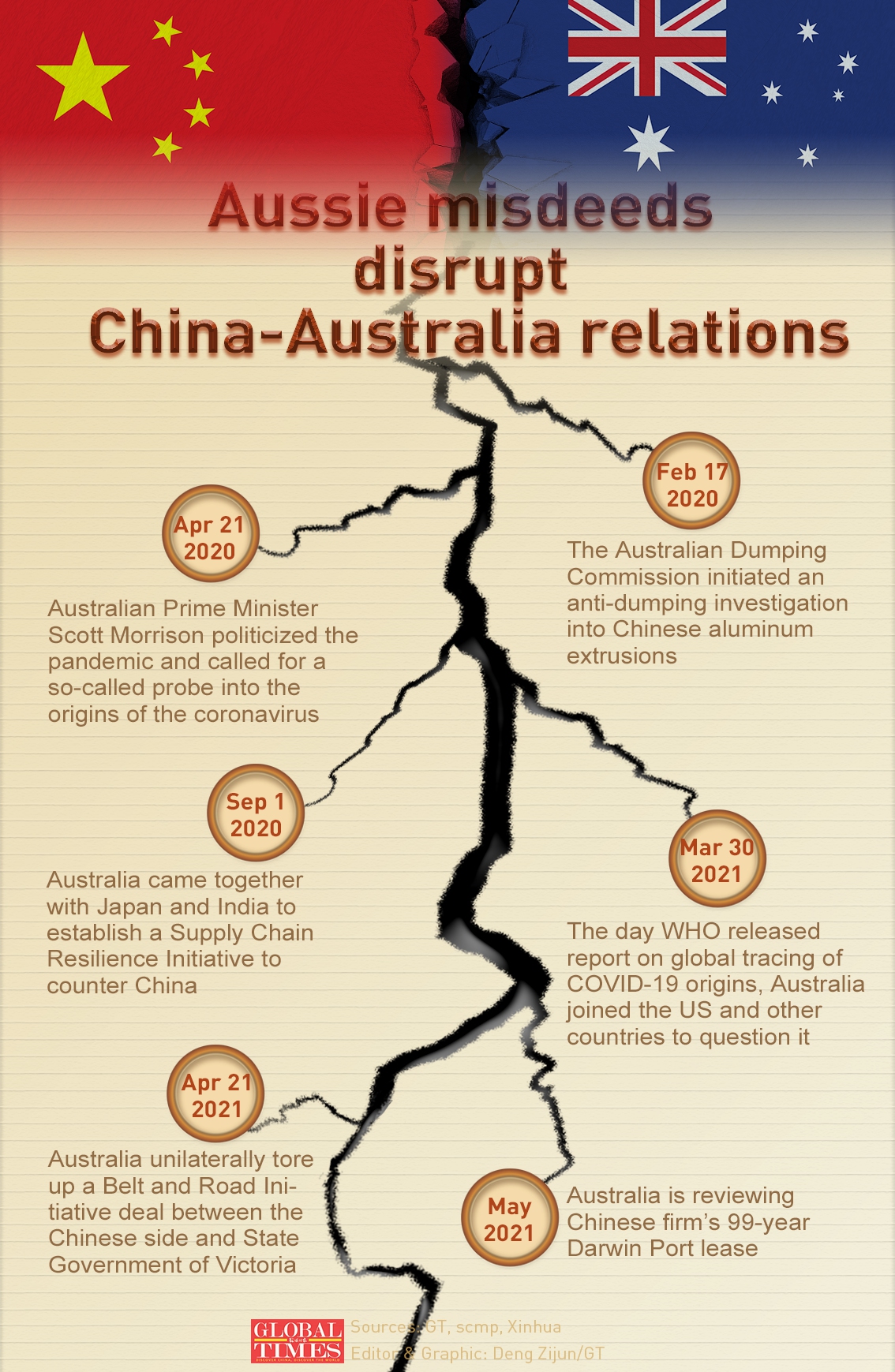 The strategic economic dialogue between China and Australia has played an important role in bilateral strategic cooperation, indirectly prompting the signing of a free trade agreement, the use of UnionPay cards in Australia, and the signing of a BRI memorandum of understanding with the state of Victoria.

Although the shut-down of this communication channel won't generate an immediate impact on the Australian economy, it could deprive the nation of forward-looking cooperation opportunities in sectors such as energy, mining and electronic payments with China, Yu Lei, chief research fellow at the Research Center for Pacific Island Countries at Liaocheng University in East China's Shandong Province, told the Global Times.

Given a series of damages the Australian government has caused to China-Australia ties, the two countries have been engaged in a deadlocked situation until now, but if Australia continues making mistakes resulting in the already disheartening and disappointing situation becoming worse, the two countries might not be able to avoid an "implosion," Chen said.

"It won't be the only case for an official communication channel to be shut down. Bilateral government-to-government communication would see a reduction in the near future, so as communications between commerce departments, which in turn would not yield new trade deals," Zhou said.

Analysts predict Australia's trade with China would further plunge, including in bulk commodities such as iron ore, wreaking havoc throughout Australia's economy.

A long list of Australia's exports to China, from wine and lobster to timber and hay, have run into problems as bilateral ties took a dive starting in 2018 when Australia became the first country to ban Chinese telecoms firm Huawei's 5G participation in the country.

Australia's cross-Tasman neighbor, which takes a drastically different approach toward China from Australia and distances itself from a unified Five Eyes' stance, appears to have been reaping a windfall out of souring relations between China and Australia.

"Both of the two countries share complementary trade relations with China, with an overlap in the exports of agricultural products such as wood, milk powder, meat, wool, and wine," Zhou said.

This means that when Australia continuously sabotages the bilateral relationship, New Zealand has the full capability of "filling the demand gap" amid growing demand from the Chinese middle class for imported quality products like wine, beef, dairy products, and so on, analysts said.

Some Australian media reported earlier that when Australia was affected by souring ties with China, New Zealand was "rewarded" with booming exports to China.

In 2020, China's imports from Australia dwindled 2.15 percent to 145.2 billion Australian dollars, while imports from New Zealand surged about 16 percent to $19.4 billion, among which dairy products accounted for more than $5 billion, relevant data showed.

"Many Australian products that were previously exported to China can be replaced by products made in New Zealand," Chen said.

New Zealand could also be an alternative destination for studying abroad, especially when many Chinese students prioritize safety amid rising incidences of racial discrimination in Australia, the expert added.

Most Australia-China education businesses reported a fall in business confidence and deteriorating attitudes toward Australian education among Chinese people during the past year amid fraught bilateral ties and the COVID-19 pandemic, according to a previous industry survey.

"New Zealand is more pragmatic and attaches great importance to the Chinese market. Unlike Australia which joined the Western-led bloc to interfere in China's internal affairs, New Zealand draws a line between politics and the economy, and that's why it wins and Australia loses amid rising geopolitical uncertainty," Zhou said.