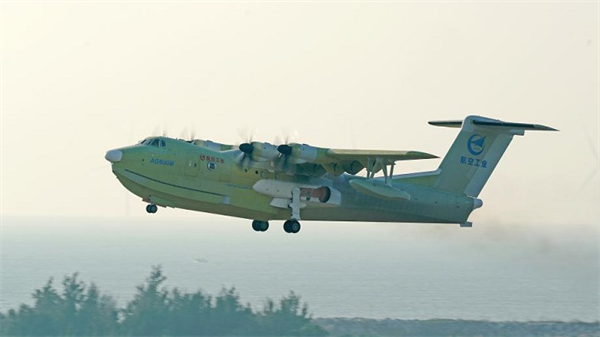 During the 13-minute flight, the aircraft carried out a series of planned flight tests. It performed well, and all of its systems were operating stably, AVIC said.

It is the third of the AG600M aircraft prototypes.

The AG600M is specifically designed to combat forest fires. Its maximum take-off weight is 60 tonnes, with a water-carrying capacity of up to 12 tonnes and a flight range reaching 4,500 kilometers. It can conduct low-altitude flight at low speed, enabling it to drop water more precisely over the fire sites.

During the aircraft-development phase, the AVIC will produce a total of four prototypes of AG600M aircraft to carry out related test missions.

The previous two AG600M prototypes have consecutively completed maiden flight in May and September of this year.

The AVIC has three AG600M prototypes to undertake flight tests and other test missions, aiming to accelerate the progress of this large amphibious aircraft model.

Next, the AG600M will enter the airworthiness phase. More variants of the AG600 aircraft are under development, according to the developer.