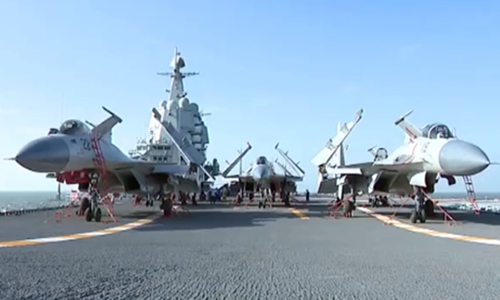 China's third aircraft carrier could be launched within the next two years, be combat ready by 2025 and feature an electromagnetic catapult and stealth fighter jets, a professional Chinese military magazine predicted Wednesday following the commissioning of the country's second carrier Shandong on Tuesday.

These technological advances will make the third carrier significantly different from the previous two and more powerful than them combined, Chinese military experts said.

To launch aircraft, it is likely the third carrier will use three to four electromagnetic catapults instead of the old-fashioned ski-jump deck, according to a Wednesday report by Ordnance Industry Science Technology, a Xi'an-based periodical focused on the national defense industry.

The report quoted Zhu Yingfu, chief designer of China's first aircraft carrier Liaoning, as saying in a speech on China's future carriers that China was developing both a steam-powered and an electromagnetic catapult -- and he personally preferred the latter.

By installing the catapults, the third carrier will gain amplified capability for releasing aircraft while also enabling it to send large attack drones and fixed-wing early-warning aircraft into the sky.

The catapults will increase the release speed of aircraft by at least one-third, Xu Guangyu, a senior adviser to the China Arms Control and Disarmament Association, told the Global Times on Wednesday.

This could make the comprehensive combat capability of the third carrier surpass that of the first and second carriers combined, the magazine said. 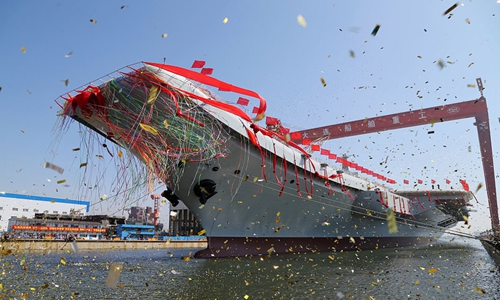 Development of a catapult-based stealth fighter jet is expected to finish within five years, moving in tandem with construction of the third carrier, according to the report.

Xu, too, believed it is questionable whether the third carrier could be nuclear-powered, but said it will at least get more powerful conventional power than the

While many military analysts predict the third carrier to have a displacement of about 80,000 tons, the Ordnance Industry Science Technology magazine expected 65,000 to 70,000 tons, with a length of more than 310 meters and width around 80 meters, carrying more than 50 aircraft of multiple types.

Xu predicted the third carrier could carry more aircraft, about 60 to 70.

Construction of a third carrier has been reported by state-owned media since November 2018, while the Ministry of National Defense or the Navy has yet to confirm the information.

China's third carrier is still not expected to rival US carriers, the experts noted.

All 11 US carriers are nuclear-powered with displacements of more than 100,000 tons, Xu said, noting that the US was very experienced with aircraft carriers and China would need time to match it.

The experts stressed China's aircraft carrier development was defensive in nature, aims to safeguard national sovereignty and would not be used to seek hegemony.