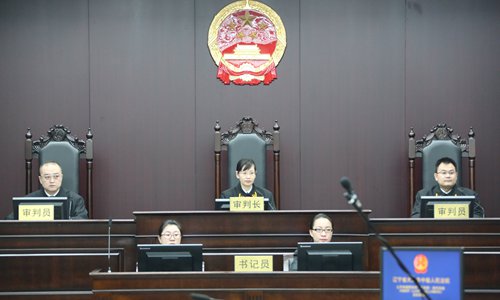 China's Supreme People's Court said it would investigate a stay-of-execution ruling made in March that provoked nationwide outrage in a notorious rape and murder of a 10-year-old village girl in South China's Guangxi.

Found guilty in 2018 of rape and murder, Yang Guangyi, of South China's Guangxi Zhuang Autonomous Region, was sentenced to death in the first instance and given a stay of execution in the second.

The reprieve in March by Guangxi's high people's court provoked online fury over its approach to the brutal murderer of the 10-year-old girl.

Media reported the anonymous victim, who earned 32 yuan ($4.52) selling passion fruit in town, was killed on her way home to her village.

The girl was raped and killed by the then 29-year-old man from the same village, media reported. Yang stole the money and threw her body into the hillside.

Chengdu Media Group's Red Star News reported Friday that the girl was strangled into a coma by Yang.

When she awoke Yang brutally stabbed her in the eyes and neck.

A witness said since Yang was 15, he often stole women's underwear.

Yang surrendered himself to the police and confessed his crime at his father's company.

Yang's surrender and confession offered legal grounds for a lighter punishment. But given the seriousness of his crime, Yang did not receive a reduced sentence in his first trial.

On July 12, 2019, the court in Qinzhou, Guangxi sentenced Yang to death for rape, deprived him of his political rights for life and ordered he pay 32 yuan ($4.52) compensation to the deceased girl's mother.

In a retrial in March, Guangxi's high people's court considered Yang's voluntary surrender, which the court believed was key to solving the case and gave his death sentence a reprieve.

The girl lived in a single-parent family. Her father died when she was still a baby and her mother took care of five children on her own. She makes a living by doing odd job and some farming, media reported.  The mother of the girl told media they were determined to "seek justice for the child."

The family appealed for immediate execution.

The topic had received over 250 million views and 30,000 discussions on China's Twitter-like Sina Weibo platform as of Sunday.

Most posters agreed that the stay of execution rewarded Yang's cruelty, encouraged crime and undermined the credibility of the law.

Chinese legal experts asserted the public voice could supervise but not hold sway over the judicial process.

"Although I am a supporter of immediate execution, the case still has to be solved through the judicial process," posted one internet user. "We can't make cases special just because of exposure to angry netizens."

The final judgment of the Beijing-based Supreme People's Court has not been disclosed.