China's top economic planner on Tuesday vowed to resort to all necessary means based on the country's price law, mulling concrete measures to intervene in coal prices, as the official stance grows harsher on runaway coal prices that have put energy supplies at stake. 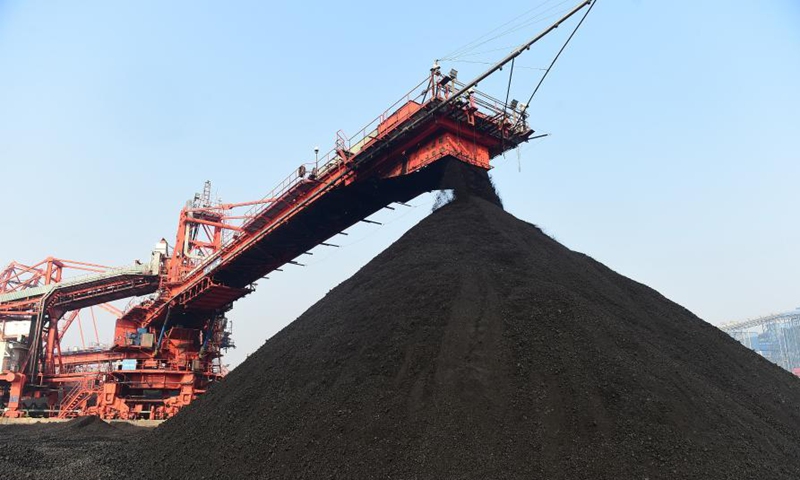 The National Development and Reform Commission (NDRC) said that coal prices have become completely divorced from the fundamentals of supply and demand and as the heating season approaches, prices are still showing a further trend of irrational rises.

In order to stabilize coal prices and supply, the NDRC on Tuesday gathered key coal enterprises and industry associations to study measures to intervene in coal prices in accordance with the law.

The NDRC vowed to make full use of all necessary means stipulated in the Price Law to intervene in coal prices, so as to promote the return of coal prices to a reasonable range, which will ensure the security and stable supply of energy, and ensure heating in the winter.

Coal futures swiftly plunged after the official pledge. As of 10 pm on Tuesday, the active contracts of coking coal and thermal coal had plummeted by their daily limits.

Under no grounds, should a surge in thermal coal prices to as high as 1,500 yuan ($234) per ton from last year's level of about 500 yuan be justified, Han said, anticipating tough penalties in accordance with the price law for those malicious futures traders.

He expected the intervening measures in the pipeline to have an immediate cooling impact on coal prices, although it's hard to forecast how deep the correction might be during the fourth quarter.

The people's livelihoods ought to always be on the front burner, the analyst said, urging policymakers not to be overwhelmed by a push to align domestic prices with their international counterparts.

All regions should maintain normal production at coal mines during holidays and major activities, and it is strictly prohibited to shut down coal mines at will or to suspend production in an entire region due to individual coal mine accidents, according to NDRC.

The nation's top economic planner has set a target of daily coal output of 12 million tons under safe conditions. Currently, China has coal inventories of 88 million tons, enough for 16 days.

Separately, the NDRC has dispatched a team to inspect the Zhengzhou Commodity Exchange on Tuesday afternoon, when a symposium was held. Price moves of thermal coal futures since the start of the year were analyzed at the symposium, which concluded with a stern crackdown on malicious speculative bets on thermal coal futures.

Starting from Wednesday night, the price limit up or down of the most-active thermal coal contracts during night trading will be curbed at 10 percent, the Zhengzhou Commodity Exchange said, in a bid to curb soaring prices.

The move came amid rising coal futures in recent days. Bloomberg reported that coal futures in China notched up another record, as the thermal coal contract on the Zhengzhou Commodity Exchange plunged 5.5 percent in the final 10 minutes of trading Tuesday, closing up 0.4 percent at 1,835.6 yuan ($287) a ton. Prices had earlier risen as high as 1,982 yuan a ton, extending a surge that's seen the price more than double since the beginning of September.

The main coal production bases in North China's Shanxi Province, Northwest China's Shaanxi Province and North China's Inner Mongolia Autonomous Region are required to immediately lower prices by 100 yuan a ton starting from Tuesday, and officials in Yulin, a coal mining hub in Shaanxi, said all state-owned mines there would cut such prices by 6pm on Tuesday, according to industry outlet coalresource.com.